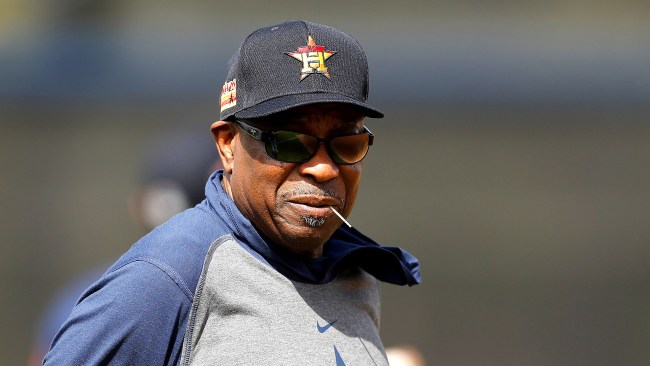 Last week, actor Zac Efron appeared on First We Feast’s “Hot Ones” show and he and the show’s host Sean Evans covered numerous topics as they blasted through 10 different super spicy hot sauces on the wings of death.

They hit on his new Quibi series called Killing Zac Efron (he calls the dangerous things he does on the show his “therapy”), some paparazzi advice Efron received from Leonardo DiCaprio, and how after filming Baywatch he realized that he doesn’t “ever want to be in that good of shape again.”

I can relate, brother.

Efron, who collects autographed baseballs and grew up in San Francisco, also shared an epic story about how he gained current Houston Astros manager Dusty Baker’s signature as a child while Baker was the manager of the Giants.

“He drove by and he was on a motorcycle so he didn’t have a window he could roll up,” Efron recalled. “So he saw, there was a couple people waiting for him, and I ran up with a baseball. I had a blue pen and a sweet spot of a brand-new ball and I showed it to him and Dusty was like, ‘Oh, I can’t right now, I gotta go to church.’ And that just means usually ‘don’t have time’ right? He’s like ‘I’ll be back in 30 minutes.’ He left and I thought I was never gonna see him again.

“45 minutes later, the motorcycle came roaring in, and I was like, ‘No way.’ And he literally pointed right at me and was like, ‘Come over here.” And I walked over and he was like, “You still got that ball?” and I was like, “Yeah, thank you sir.” And I handed it to him and he signed it. So that one meant a lot to me just because Dusty Baker, like, doubled back from church. Who knows what he did? But it was pretty awesome. It just really cool. Like, I had bleached hair. I was a little kid. Just awesome.”

Very cool. Maybe some of that consideration for others will rub off on some of his oblivious players (and team owner) when the MLB season finally gets rolling.

Check out the full episode of Efron’s appearance on “Hot Ones” below.