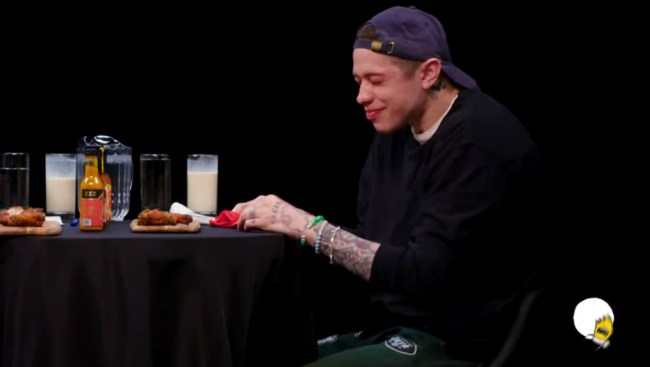 We may have a new leader with regard to doing the worst and suffering the most while taking First We Feast’s “Hot Ones” Challenge and his name is Pete Davidson.

Davidson was VERY out of his element during this episode, sweating, shaking, tearing up. It was almost hard to watch. If we didn’t get such joy out of the misery of others it would have been.

His reactions almost take away the fact that Davidson hit on a number of subjects of interest to many people.

Bro got absolutely murdalized by the hot sauces they chose.

If I were to provide a synopsis of Davidson’s “Hot Ones” episode, I would say, “Pete reveals to host Sean Evans that he can’t smoke weed in peace because Ariana Grande made him famous while he sweats, shakes and has tears running down his face from eating super spicy hot wings… or something like that.” Hey, I just did provide a synopsis!