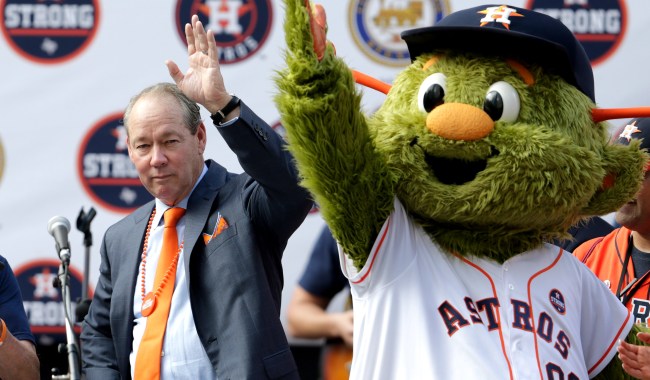 Houston Astros owner Jim Crane (that’s him on the left above), despite the fact that Major League Baseball hasn’t been on the field since it shut down Spring Training on March 12, is somehow STILL managing to place his foot directly into his mouth.

It was one thing for the Astros’ lawyers to laughably claim the team expressed “sincere apologies and remorse” for sign stealing in court papers filed in one of the numerous lawsuits against them.

As The Athletic points out, what equally clueless MLB commissioner Rob Manfred actually wrote about Crane was, “At the outset, I also can say our investigation revealed absolutely no evidence that Jim Crane, the owner of the Astros, was aware of any of the conduct described in this report. Crane is extraordinarily troubled and upset by the conduct of members of his organization, fully supported my investigation, and provided unfettered access to any and all information requested.”

If you’re still looking for the word “exonerated” in that statement, you might as well stop now because it isn’t in there.

Then, just to reinforce the fact that MLB never “exonerated” Crane, The Athletic asked Major League Basbeall directly if they did, in fact, do such a thing. Their response? “All of our comments about the investigation are included in the report.”

“…since the Houston Astros have made the Commissioner’s report the focal point of their motion, I see no other option but to set the depositions for those involved in the investigation,” Meiselas wrote.

“The report is highly suspect in many ways which will be the subject of discovery. Commissioner Manfred has not exactly gotten high grades for [h]is handling of any of this, to put it mildly.”