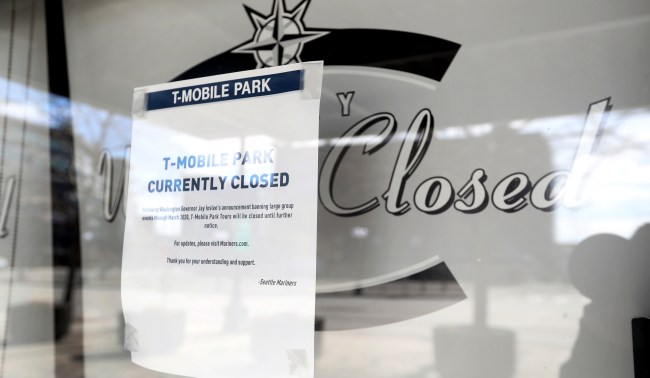 Here’s a shocker for you. Major League Baseball and its commissioner Rob Manfred, even though they have officially shut down Spring Training and postponed the beginning of the 2020 season, are still managing to find themselves in a controversy.

In a new report by Ken Rosenthal and Evan Drellich of The Athletic, Major League Baseball and the MLB Players Association are bickering about players still having access to the league’s Spring Training facilities in the middle of a worldwide pandemic.

A memo issued on Sunday by MLB deputy commissioner Dan Halem reads, “The strong recommendation from our infectious disease and public health experts is that Clubs should avoid all activities in which players congregate in significant numbers or are otherwise unable to practice the ‘social distancing’ protocols recommended by the CDC.”

One problem. Not every team is following the same approach during this time of concern. Some teams have completely shut down their facilities, while others are allowing players to continue to use them.

And here’s the kicker… the MLBPA is mad because they WANT the players to all have access to their teams’ facilities.

Some players do not want to travel in the current climate. Others might live near the spring complex. Foreign players might not be able to return home easily, if at all. In addition, many players view a team facility as a safer, more controlled environment than a local gym.

The MLB memo specifies that clubs should provide players who choose to remain with access to medical care, but says teams are not required to provide all services normally available during spring training, such as on-site meals.

In the view of several executives and MLB officials, any objection to limited access in the middle of a public health crisis misses the larger point of trying to keep players safe. Those officials worry that keeping spring training sites open in any capacity will only delay a shutdown.

Never thought I would say this, but those Major League Baseball executives and officials are right. Team officials also pointed out that by keeping the spring training complexes open they are putting older staff members at risk.

Teams that are among those who have received complaints from players reportedly include the Orioles, the Brewers, Braves, Marlins and Mets.

Even as MLB and the PA technically agree that facilities are to be open to major-league players for now, they differ about what “open” means.

Two agents used the same word — “chaos” — to describe the mixed messages players are receiving. The confusion, however, is partly the result of protocols that are changing rapidly according to the available information, MLB and club officials say.