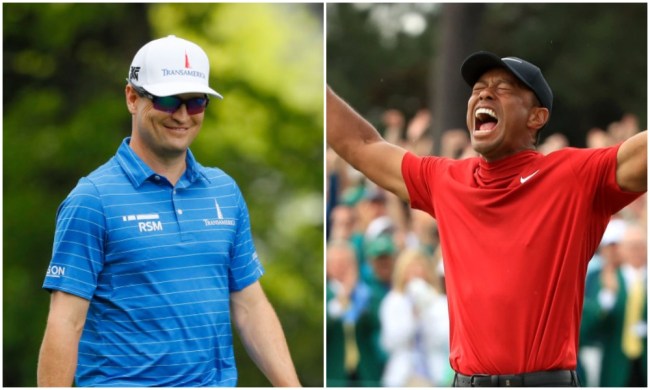 Everyone was glued to the TV during the final-round of the 2019 Masters, especially down the stretch with Tiger Woods making his run and eventually capturing his fifth green jacket. It was one of the great moments not only in golf but in sports history in general.

One thing we don’t really think about is the fact that other players on the course, specifically those with tee times near Woods’ last year, didn’t get to watch his round seeing as how they themselves were busy trying to catch The Big Cat and earn a larger paycheck. Well, Zach Johnson wasn’t about to miss out on the magic so he improvised.

Johnson teed off at 9:09 EST on that Sunday in the group ahead of Woods. Johnson’s group started on the back-nine while Woods’ group went off the front-nine therefore Johnson didn’t get to watch Woods’ group play behind him. Thanks to technology, however, Johnson grabbed his caddie’s phone and watched Woods make his run while playing his last four or five holes of the tournament.

Never heard this one before: Zach Johnson says on pre-recorded ESPN piece that he played his last 4-5 holes in last year's final round while watching every one of Tiger's shots on his caddie's phone.

Talk about the Tiger Effect. We’re talking about Zach Johnson, a two-time major champion and an owner of a green jacket of his own while playing in the tournament and didn’t miss a shot from Tiger down the stretch.

Johnson watching Woods on his caddie’s phone is the perfect example of the magic and theatre we all witnessed a year ago at Augusta National.

Johnson wasn’t having a good Sunday, he shot 5-over to finish T-58, so he was pretty much tapped out of his round and wanted to witness the GOAT do GOAT things. What a story.