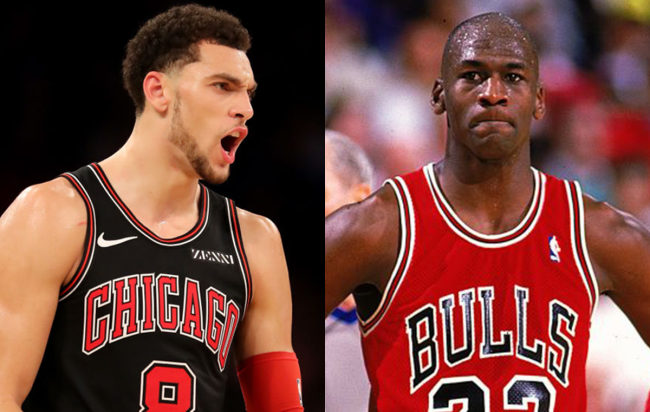 It’s been a pretty good February for Zach LaVine, as the Bulls forward who treated us to an incredible quote following a scuffle with Josh Jackson is currently averaging 32 points-per-game, making him the undisputed star of an otherwise fairly unremarkable team that’s sporting a 14-16 record.

Anyone who decides to take their talents to Chicago does so knowing that they’ll be permanently playing in the shadow of Michael Jordan, as it’s a forgone conclusion that you’re never going to even be able to come close to accomplishing what His Airness did on his way to establishing himself as one of the best—if not the best—athletes to ever do their thing on the hardwood.

By now, the debate over whether or not Jordan is the G.O.A.T. is as tired as it is fruitless, and while it goes without saying he’s the best player to ever don a Bulls uniform, it can be hard to appreciate just how much he achieved during his time with a franchise where he remains the all-time leader in:

Jordan averaged 31.2 PPG over the course of his 13 seasons with the Bulls, and on Monday, NBC Sports Chicago decided to see where LaVine’s monster month measures up compared to other players who’ve gone on similar tears.

However, based on the insane stat that was highlighted on the broadcast, “player” would probably be the better word to use here, as LaVine’s current scoring average is the 31st-most impressive in the history of the organization behind Jordan, who is also responsible for the rest of the top 46.

Michael Jordan was ok at basketball it would seem 💀💀💀 pic.twitter.com/J9deI1PNx1

This shouldn’t really come as a huge surprise, but at the same time, I can’t think of one single statistic that highlights just how absurdly dominant Jordan was back in the day—and based on what we know about his ruthlessly competitive nature, I wouldn’t be shocked to hear he’s privately seething knowing he can’t make a comeback and play 15 more months out of pure spite.