Zach Wilson Wants His Bonus Money Up Front, But The Jets Are Looking To Delay The Payout, Hence His Contract Delay 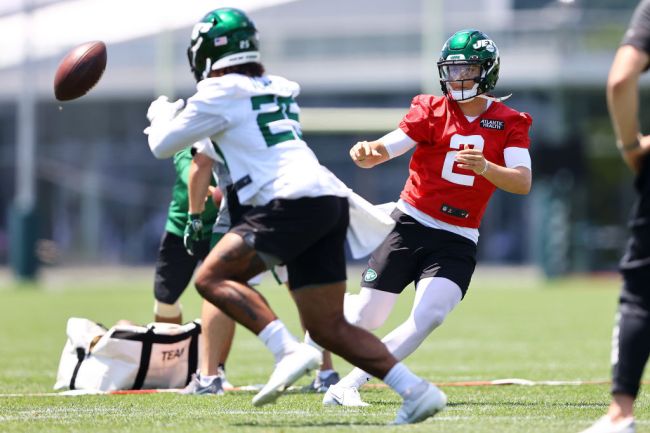 The Zach Wilson era for the New York Jets is off to an abysmal start. The No. 2 overall pick in the 2021 NFL Draft did not show up to the Jets’ training camp due to the fact that he has not signed a contract with the team.

At the time of writing this, third-overall pick Trey Lance and Wilson are the only two players of the 259 draft selection that have yet to sign contracts with their teams.

Wilson and the Jets have run into some roadblocks when it comes to negotiations. According to the New York Post, cash flow and offset language in Wilson’s proposed contract are what’s causing the delay.

The Jets are looking to defer the millions Wilson is owed in signing bonuses to when he executes the contract to 2022. Wilson doesn’t seem to be on board with that idea, and you can’t blame him given the recent precedents set that all signing bonuses are paid promptly.

Both Joe Burrow and Trevor Lawrence – the two most recent first-overall picks – received their bonuses within 15 days of signing. The Jets themselves paid out the full signing bonus received by Sam Darnold, the third overall pick back in 2018, the same year he was drafted, according to Pro Football Talk.

The Jets all of the sudden want to change that precedent, and while it could be good business on their side, signing your presumed to be franchise quarterback so he’ll show up to camp is also a good business decision.

Wilson’s four-year contract will reportedly be worth about $35.1 million with a $22.9 million signing bonus.

The Jets went through a similar situation with Darnold who missed the first three days of camp in 2018, while his agent and the now-former Jets general manager negotiated details of the contract. Darnold was still the Week 1 starter, and Wilson will likely fall into that same scenario.