The Zach Wilson Vs. Justin Fields Debate Has Reached Its Peak After They Both Made Ridiculous Throws At Their Pro Days 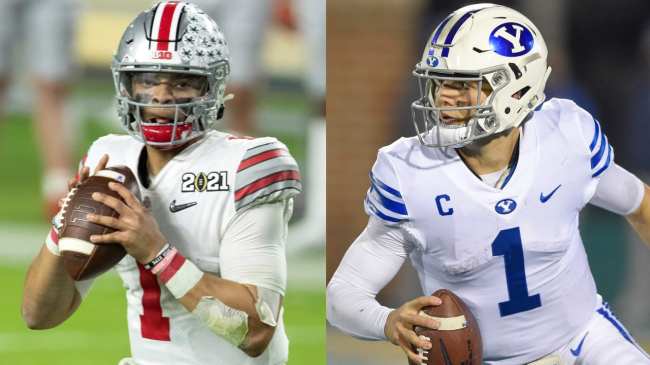 We are exactly 30 days from the 2021 NFL Draft and this year’s class is highlighted by the deep crop of quarterbacks. Trevor Lawrence is headed to Jacksonville with the No. 1 overall pick, so the debate is in full swing about who should be the next name called. While neither team has said that they are drafting a signal-caller, the New York Jets and the San Francisco 49ers pick second and third. Despite their lack of commitment, the expectation is that both teams will go ahead with selecting the future of their franchise, which makes things contentious as to who to choose.

Atop the board at the position are Lawrence, Ohio State’s Justin Fields, BYU’s Zach Wilson, North Dakota State’s Trey Lance, Alabama’s Mac Jones and Florida’s Kyle Trask. While the consensus is that those are the top six guys, Fields and Wilson appear to be destined for the top three. The decision became even more difficult on Tuesday after Fields wrapped up his Pro Day. Both gunslingers worked together with quarterback guru John Beck in the offseason and have had their chance to throw in front of NFL GMs, coaches and scouts. Both put on a show.

Everyday is an opportunity to level up, never let a day go to waste! #CombinePrep21 #NFL #3DQB pic.twitter.com/DhRdCfHeAA

Wilson, 6-foot-2, 214-pound 21-year-old, started things off last Friday and he chose to only participate in the on-field throwing portion of the day after getting measured. He made his entire afternoon look effortless.

Fields, who measured in at 6-foot-3, 227 pounds, chose only to run the 40-yard-dash in addition to the throwing portion. He was blazing fast.

When he went to spin the pigskin, things couldn’t have gone any better.

Check out the arm strength and accuracy on these throws. 😳 pic.twitter.com/FdeVz87yEF

Interestingly enough, after working together to set up their throwing performance with Beck, they both dazzled with the same rollout deep ball to finish things off. Everybody in attendance and online were wowed by both dimes.

Among those in attendance for both quarterbacks were quite a few teams hoping that their guy might potentially fall to them. For Wilson, the Jaguars, Jets, Falcons, Eagles, Lions, Panthers and Broncos were in the house, while the 49ers, Jets, Falcons, Panthers, Broncos, Eagles and Patriots sent representatives to watch Fields.

This is the last time that NFL organizations will be able to see either player workout, as the NFL Combine will not take place due to COVID-19. You can find the full schedule for Pro Days across the country here.

What do you think? Who would you want your team to take? Wilson or Fields?