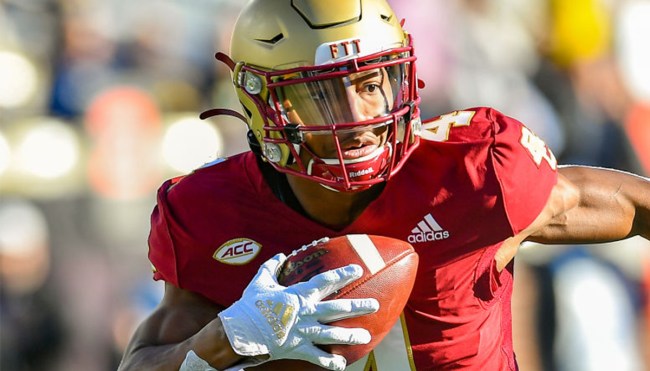 Boston College football fans (yes, they exist) haven’t had a ton to root for since Matt Ryan was the big man on campus in Chestnut Hill, but they might finally have a reason to be optimistic thanks to the solid roster Jeff Hafley has assembled heading into the 2022 season.

No one is expecting the Eagles to make a national championship run, but the team has a very realistic shot at eclipsing the seven-win mark for the first time since 2009 thanks in no small part to the two formidable offensive weapons it will be able to deploy in the form of quarterback Phil Jurkovec and wide receiver Zay Flowers.

Flowers is not only the most electric wideout to play for Boston College in recent memory but is arguably the most talented WR to ever don the maroon and gold. There was some speculation he might declare for the NFL Draft following the most recent campaign, but Eagles fans were able to breathe a sigh of relief when he announced he’d be returning for his senior year in spite of a couple of potential massive paydays he’s revealed he turned down.

Flowers recently spoke with ESPN and said people in his inner circle were contacted by intermediaries from two unnamed schools who dangled NIL offers to the tune of $300,000 and $600,000 in the hopes he would transfer. While he admitted it was “life-changing money,” he said he discussed the situation with Hafley and his father before reaffirming his commitment to the program.

Only time will tell how things will ultimately play out, but Flowers is currently in a fantastic position to boost his already notable draft stock as the top option for a QB who many people think will get scooped up in the first round next year. As a result, it seems very likely it’s only a matter of time until he secures a sizeable bag that he can use if he feels like upgrading from the sick BMW he already got from a local dealership.