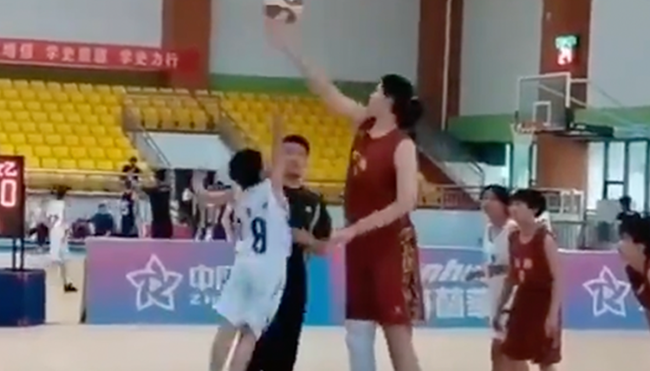 If you played a sport in high school, there’s a very good chance you can vividly recall at least one game you knew was over before it even started after stepping out of the locker room and realizing that the other team boasted a freakishly gifted opponent who couldn’t be stopped no matter how hard you tried.

As someone who got to experience that unique sinking feeling while watching Kris Dunn warm up across the court prior to one of the most humiliating experiences I’ve ever been subjected to, I cannot sympathize hard enough with the teenagers tasked with attempting to defend China’s newest basketball sensation: a 7’4″ 14-year-old named Zhang Ziyu.

Zhang, who hails from Shandong Province, recently took the internet by storm after she went viral courtesy of a highlight reel that included clips of her making her opponents look absolutely silly while leading her team to a national championship thanks in no small part to the 42 points and 25 rebounds she recorded in the title game.

The clips sparked plenty of obvious comparisons to Yao Ming and it seems like Zhang is well on her way to the WNBA if she so chooses. However, you have to wonder if the total lack of real talent will put her at a disadvantage if she does indeed decide to take her talents overseas and encounters a level of competition that appears to be virtually nonexistent in her current situation.