Zion Williamson’s Exploding Shoe Is Worth $250,000 And Nobody Knows Where The Hell It Is 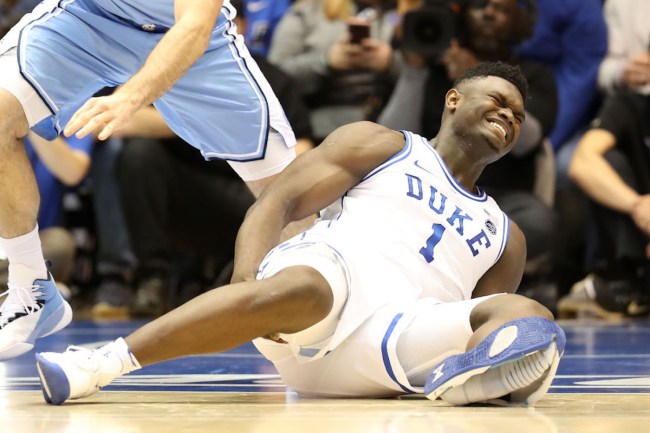 If you’re a fan of college basketball, you were in for quite a treat this weekend thanks to a thrilling slate of Elite Eight games that eventually saw Auburn, Virginia, Texas Tech, and Michigan State punch their tickets to the Final Four.

Sadly, the Spartans’ victory over Duke marked an end to the all-too-brief Zion Williamson Era as one of the most electrifying prospects in recent memory almost certainly saw his college career come to a close after one hell of a freshman season.

Williamson provided us with plenty of highlights over the course of the year but was also responsible for one of the oddest stories of the season after he was injured when his shoe unexpectedly self-destructed during a game against North Carolina.

Following the incident, people immediately started to once again debate the merits of the one-and-done rule after Williamson was sidelined for a few games thanks to the wardrobe malfunction and Nike briefly saw its market cap take a huge hit courtesy of the infamous shoe—which has apparently gone missing.

Over the weekend, TMZ Sports tried to track down the sneaker and found out no one seems to know where the hell it ended up. After Williamson told the outlet he had no idea who had the shoe, TMZ reached out to Duke, who said it wasn’t in their possession.

Nike sent reps to examine the shoe after it exploded but the company claims it’s in the dark about its whereabouts, which is kind of a big deal when you consider one expert estimates it could fetch $250,000 at auction.

Could we have another Tom Brady jersey situation on our hands or is Nike just playing dumb in the hope that everyone will forget it exploded in the first place?