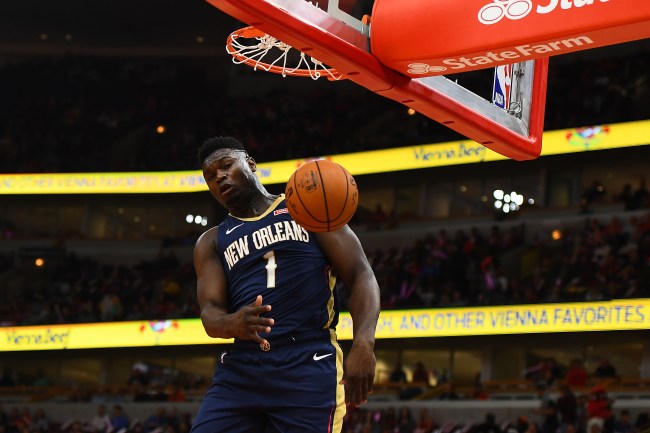 The Zion Williamson Era of the NBA has arrived. Let me be clear, this is still LeBron’s NBA. He’s the greatest on the court right now. But with the arrival of Zion Williamson to the New Orleans Pelicans, there’s a new bonafide global superstar that will have the mainstream sports media whipped up into a frenzy anytime he does something big or small.

Zion and the New Orleans Pelicans were in Chicago last night for a preseason game against the Bulls and it was just a small preview of what’s to come. He looked perfectly in sync with Lonzo Ball in transition. He was throwing down highlight dunks.

He finished the night with 29 points while shooting 12-of-13 from the field but all of those shots were inside the paint:

But you came here for the highlights and those highlights you shall receive. Here’s that 360-dunk that Zion threw down in the 3rd period:

Here we see Zion and Ball link up perfectly in transition and make it look as fluid as if these two have been playing together for years.

Zo and Zion in transition 🍿

He is just another example of how Zion Williamson can punish the opposition. Going hard inside, spinning, and dishing it out for an easy three because the defenders are forced inside to try and shut him down. He makes it look so easy:

Zion with the spin move and dish out to Frank for 3️⃣ pic.twitter.com/deLUSzqqv3

It was a pretty good night for the NBA rookie. This is still just the preseason with the 2019-2020 NBA season officially kicking off on Tuesday, October 22nd with Zion Williamson and the New Orleans Pelicans facing the defending champion Toronto Raptors followed by the Lakers vs Clippers on TNT.