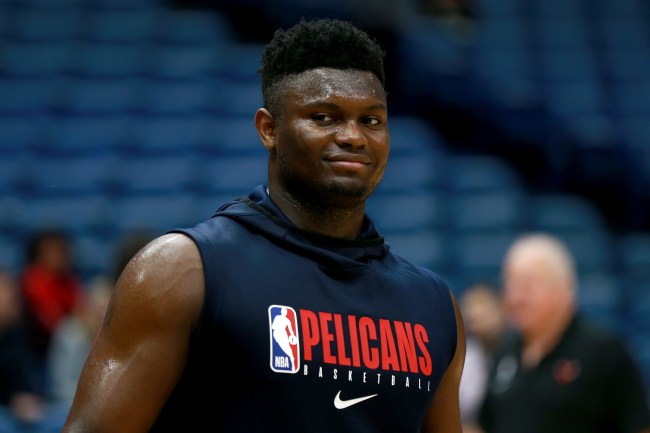 Zion Williamson’s been compared to guys like Michael Jordan and LeBron James, as the No. 1 overall pick  from the 2019 NBA Draft electrified college hoops during his lone season with the Duke Blue Devils. Unfortunately, we haven’t been able to see for ourselves what the mega-hyped rookie can do in the NBA, as Zion’s been nursing an injured knee since before the start of the regular season. Naturally, the Pelicans didn’t want to rush back their most prized possession until he was 100 percent ready — and, apparently, he’s reached that point.

That’s because, according to NBA insider Shams Charania, the Pelicans just announced that Zion Williamson will make his NBA debut on January 22 against the San Antonio Spurs — something the franchise’s general manager, David Griffin, reportedly said.

Pelicans No. 1 pick Zion Williamson is expected to make his season debut on Jan. 22 against San Antonio, David Griffin says.

It’s interesting timing for Zion to head back to the hardwood, as the Pelicans are 7-3 in their past 10 games and, somehow, are just four games back of the 8th and final playoff spot in the Western Conference. With the NBA Trade Deadline upcoming — and the Pelicans not necessarily part of any major rumors at the moment — adding the No. 1 overall pick seems to be the team’s version of making a midseason splash. Can Williamson help carry the Pelicans to the playoffs?

The fact that the Pelicans are even in the postseason discussion about midway through the NBA season is incredible, as they’ve dealt with injuries and inconsistency all year long. But Zion’s return could be the breath of fresh air that the franchise needs for a late-season push.

Given the state of Zion Williamson’s injury — which came just months after he sustained a freak injury during his lone season with the Blue Devils — some have wondered if the freakish athlete should return this season at all, or if the Pels should just rest him up and let him get to full strength. But with the team improving lately and not far behind that final playoff spot, it seems like the team’s trying to be aggressive with their plans, so we’ll have to see how it all plays out over the next 35 games of the regular season. One thing’s for sure, the hype train is about to barrel down the tracks.