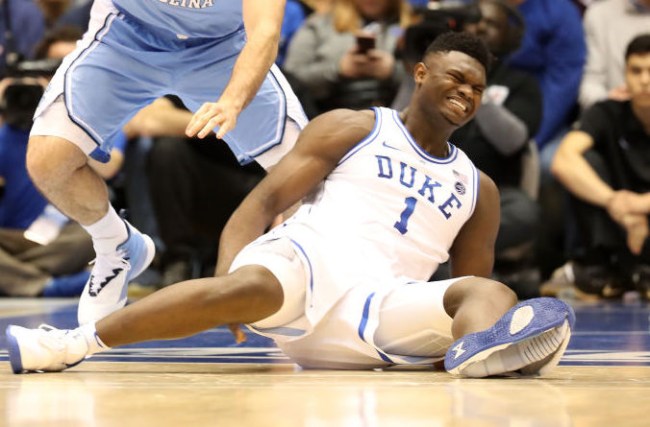 This week, some college basketball fans paid more than some people did to attend the Super Bowl in order to get the chance to see Duke take on the University of North Carolina in what may have been the most-hyped matchup of the year.

I’m not sure how much Barack Obama dropped to gain admittance but I’m pretty sure I can tell you what brought him to the game: Zion Williamson, who might be the most electric prospect the basketball world has seen since some dude named LeBron James started making waves a while back.

Unfortunately, Williamson—and everyone who’d come to see him—suffered a bit of a setback shortly after tipoff when his shoe decided to spontaneously explode 30 seconds into the game.

The standout was knocked out of the contest with a mild knee sprain, and while it doesn’t seem like it’s too serious, there are more than a few people who think Williamson should channel his inner Jon Taffer and shut it down for the rest of the season.

A lot of analysts have come to the conclusion that Williamson has already secured himself the top spot in the draft, and as a result, he doesn’t really have any motivation to finish out his freshman year if you look at things from a purely pragmatic point of view.

After last night’s incident, Darren Rovell went on an absolute tear in a tweetstorm that included an interesting nugget about an insurance policy Duke had taken out on their superstar prior to the season.

JUST IN: Zion Williamson has $8 million in loss of value insurance from policy written by ISI, according to sources. In order to start collecting, however, he would have to slip past the 16th pick in this year’s draft, which isn’t happening. pic.twitter.com/wDVAyhY2R0

Sources: Duke paid for Zion Williamson’s insurance policy, as schools are allowed to do. Premium for a $8 million loss of value policy runs around $50,000.

As D-Rov notes, there’s virtually no chance he’ll end up collecting on what is a fairly small sum when compared to what the top pick in the draft will normally get. As a result, I’d think that reality would give him even more incentive to say fuck the lemons and bail to the NBA before having the chance to suffer another setback while playing for free.