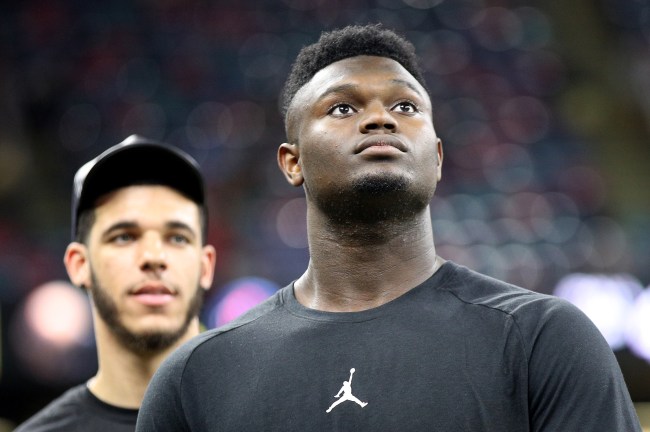 On May 10, Zion Williamson’s former agent, Gina Ford of Prime Sports Marketing, served the Pelicans’ big man with legal requests to admit that he received “impermissible benefits” attend Duke University and wear and/or use Nike and Adidas. It is now being reported that Williamson has filed for a protective order against Ford’s requests and eligibility inquiry.

The legal documents were made public by Wallach Legal founder Daniel Wallach.

The documents posted by Wallach shows a list of items alleging that he received “money, benefits, favors or others things of value” to sign with the Blue Devils for the 2018-19 college basketball season and wear or use the aforementioned brands, according to 247 Sports. The served requests name Williamson and his mother and stepfather, Sharonda Sampson and Lee Anderson, and Ford is trying to make him say “yes or no” under oath regarding whether or not he accepted the impermissible benefits.

Williamson originally signed with Prime Sports after he left Duke, but filed a lawsuit to terminate the five-year contract June 13.

The recent legal filing made by Williamson is attempting to block Ford’s inquiry as it claims to be ‘invasive’ and ‘irrelevant.’

BREAKING: Zion Williamson files for protective order against ‘invasive' and 'irrelevant' discovery requests, seeks court order to block Gina Ford’s inquiry into past eligibility at Duke and whether he received any improper economic benefits. pic.twitter.com/7GM4Hppyp7

Williamson first signed to be represented by Ford’s company but ultimately decided to sign with Creative Artists Agency. To get out of the contract, he had to sue Ford claiming their contract violated North Carolina’s Uniform Athlete Agents Act.

While whatever comes of this lawsuit and investigation likely won’t affect Williamson or his NBA career at this point, Duke fans will be paying close attention from here on out because if they find evidence that he did receive improper benefits the consequences the basketball program and even head coach Mike Krzyzewski could face could be extremely impactful.