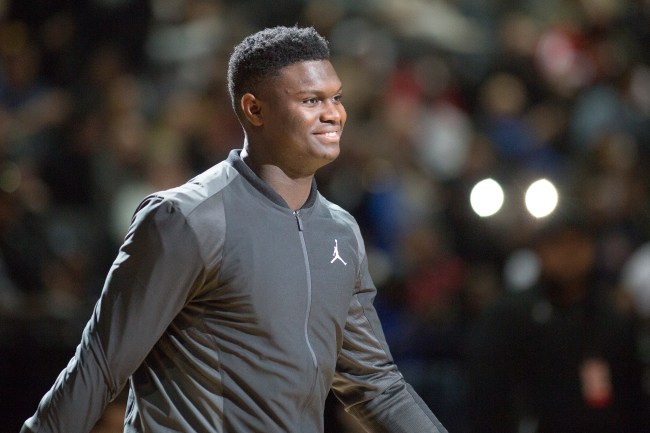 Zion Williamson’s officially on Michael Jordan’s team. The No. 1 overall pick in this year’s NBA Draft — and one of the most-hyped players to enter the league in about 15 years — announced in an Instagram post that he made a decision with a sneaker company, dropping a short video of an animated version of himself repping Jordan Brand. Take a look at the video below.

The decision makes Zion Williamson one of the 50-plus athletes across various sports to rep with Jordan Brand, which is a sub-division of Nike, and puts to rest any questions about which sneaker brand the New Orleans Pelicans’ rookie would sign with. Many were unsure about who was leading the “sneaker war” to get Zion, but, in the end, it was Jordan Brand who swooped in.

Although financial details weren’t disclosed, Bleacher Report‘s reporting that it’s a multiyear deal. As part of the announcement, here’s what both Zion and several Jordan Brand execs had to say about the partnership, per Nike’s press release.

“I feel incredibly blessed to be a part of the Jordan Brand family,” says Williamson. “Since I was a kid, I dreamed of making it to the league and having the type of impact on the game Michael Jordan had and continues to have today. He was one of those special athletes I looked up to, and I really can’t express how happy and excited I am for this journey.”

“We’re excited to welcome Zion to the Jordan Brand,” says Craig Williams, Jordan Brand President. “It’s incredible to watch him play the game with unbridled passion and joy and we look forward to building our relationship with him for many years to come.”

And, of course, the GOAT himself, Michael Jordan, made sure to offer some thoughts on what it means to add Zion Williamson, who’e expected to become a superstar that transforms the game on and off the court like MJ did during his playing days.

“Zion’s incredible determination, character and play are inspiring,” says Jordan. “He’s an essential part of the new talent that will help lead the brand into the future. He told us he would ‘shock the world,’ and asked us to believe him. We do.”

There was plenty of intrigue surrounding the apparel brand that Williamson would sign with, but things went next level last college hoops season when his Nike shoe exploded in a game against North Carolina. Many thought it may have put Nike behind the 8-ball to sign the phenom — although the brand went to extreme lengths to play damage control — but, even so, Zion Williamson teased the Internet by wearing rival apparel several times to keep the pressure on.

With many experts believing Zion Williamson could earn $1 billion in his lifetime from basketball and sponsorships, his agreement with Jordan Brand is the first major deal to, presumably, help him get there. And, while the contract details aren’t yet known, many thought Zion’s shoe deal would be the most lucrative in history for a rookie, so we’ll have to wait and see if that ended up being the case or not.