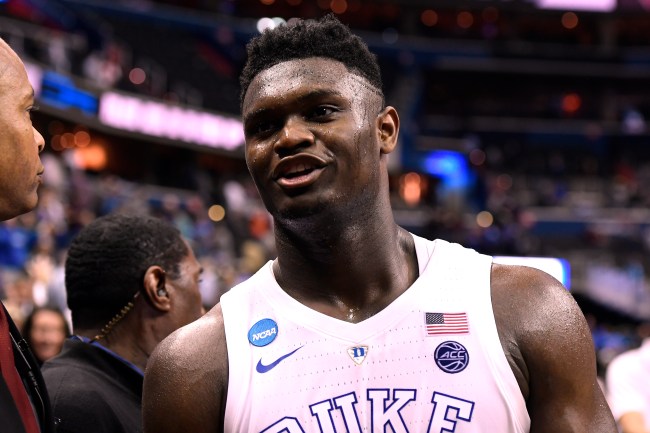 Zion Williamson and his Duke Blue Devils may have lost in the NCAA Tournament’s Elite Eight yesterday, but now that the freshman’s college career is, presumably, over, he can start looking forward to some very big (and lucrative) wins in the coming months. That’s because Zion’s projected as the No. 1 overall pick in the upcoming NBA Draft, and, for that reason, there’s a lot of speculation about which sponsorship deals he may sign.

The biggest endorsement deal of them all? It’ll probably be the one he inks with a shoe company, with brands like Nike, adidas, Reebok, Under Armour and others all shooting their shot with the kid, with all being forced to dig deep into their pockets to try and lure him to their company. And, according to a piece by Nick DePaula of ESPN — who spoke with Sonny Vaccaro, the legendary shoe executive who helped negotiate Michael Jordan’s shoe deal in 1984 — Zion Williamson could be in line for a contract exceeding $100 million.

“In my lifetime, I think it’s going to be the biggest bidding war ever done,” said Sonny Vaccaro, a legendary former shoe executive who signed Michael Jordan to Nike in 1984. “I would put them all on go.”

If Vaccaro’s prediction is accurate, that would mean Zion Williamson’s assumed shoe contract would exceed LeBron James’ $90 million rookie sponsorship deal with Nike in 2003, with no other first-year NBA player even coming close to that figure since. Considering James’ deal came 16 years ago — and Zion’s the most-hyped NBA prospect since — it’s safe to say the Duke superstar is going to reach a nine-figure endorsement deal.

Of course, when it comes to these types of reports, they are often inflated beyond belief. Remember, when Andrew Wiggins first came into the league, it was believed that he was asking for an absurd $180 million from adidas — which ended up being a hefty $12-13 million per year — so this should all be taken with a grain of salt for now. Still, Zion Williamson is believed to be a transcendent star who has the charisma and skills to be a major star like the aforementioned Jordan and James in the marketing game, so a $100 million shoe deal isn’t out of the realm of possibility for him.