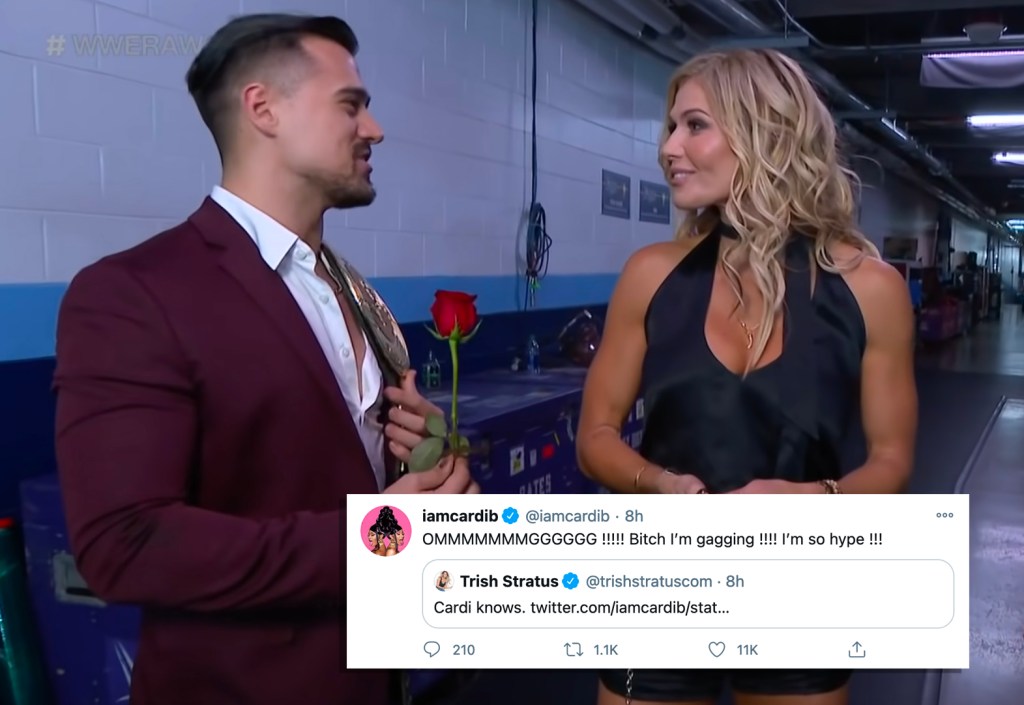 It turns out that rapper Cardi B was once a huge fan of WWE and her love for the company came back QUICK after the world-famous rapper went total fangirl after being mentioned during “Legends Night” on Raw.

Wilson, who’s still a damn smoke show, declines Garza’s offer of a rose but invites him to hang her and all of her friends to watch the rest of the show.

Wilson claims she invited Cardi B, Kylie Jenner, and Ariana Grande to the show and they’re waiting in a backstage area. She encouraged Garza to go hang with them while she finished her conversation with Nikki Cross.

Garza excitedly searches for the backstage party, only to find the Boogeyman and lose the WWE 24/7 title.

After Cardi B’s name was mentioned on the show, her Twitter blew up with fans tagging her on WWE tweets and mentions. This left the rapper completely confused.

No , I used https://t.co/NNS8NSjCZS seeing people tagging me on WWE stuff and I’m kinda confuse https://t.co/w6HDoDAI7c

Once Cardi B realized what was going on – and WWE legends started mentioning her on Twitter – the 28-year-old lost her mind.

Wow what a great night for me ! I remember your first debut with the two dudes you used to be with ! Just wow ! https://t.co/8A3F0H1mQF

Cardi B then went on to threaten Vince McMahon and offer herself up for WrestleMania.

WWWWTTTTFFFFFFFFF ….😩😂😂😂😂This is not how my wwe debut was supposed to be ! Vince McMahon COUNT YOUR FUCKIN DAYS !!!! https://t.co/P4LQvOWnsx

I’m not her biggest fan but even I’ll admit that Cardi B accompanying Sasha Banks to the ring would be FIRE.