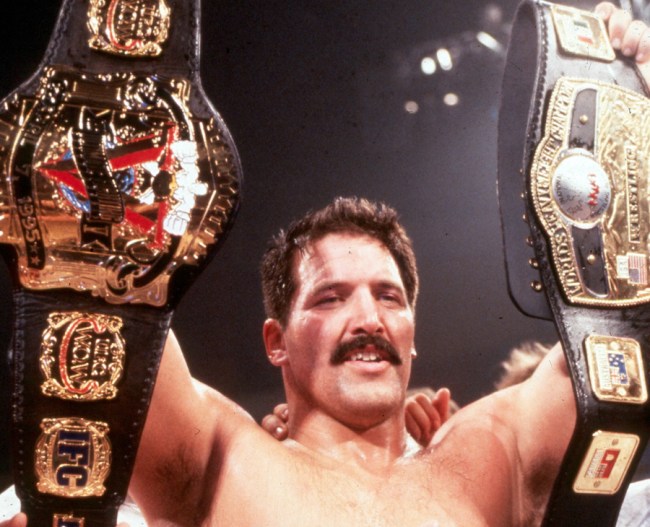 “The Beast” is the first and only UFC Triple Crown champion and held the NWA world heavyweight title for 4 years.

He’s one of the most respected fighters and wrestlers globally, but during his time in the WWE, all of those accolades were almost completely ignored.

On a recent episode of Not About Wrestling, author Ian Douglass discussed Severn’s run with the WWE (then WWF) and helped Severn chronicle the short run in his biography, The Realest Guy in the Room: The Life and Times of Dan Severn.

Douglass connected with Severn after doing a few consulting gigs and reaching out for quotes on fitness articles.

On one occasion, Douglass spoke to Severn for an extended period of time, which led the author to think if he could repeat that process about 15 more times, Severn would have a strong book on his hands.

One of the first conversations covered his being nicknamed “The Beast” by an NFL legend.

“He was specifically nicknamed ‘The Beast’ by Jim Brown,” explains Douglass.

“Brown was doing color commentary of the second UFC show that Severn was involved in. Severn lost in his first appearance in the finals to Royce Gracie. He came back and won the next tournament. That’s when Jim Brown made the proclamation that Dan Severn was a “beast” and the name stuck.”

Severn considers himself one of the most legitimately feared yet ignored champion in company history. Douglass explains how this feeling is warranted.

During Severn’s run with the WWE, he competed in seven mixed martial arts contests and won them all. This fact was never addressed or even mentioned on WWE television.

“As he’s fulfilling a WWE schedule, he’s fighting on the weekends and winning. None of that was ever mentioned on a WWE broadcast.

When you think about what wrestling organizations are doing with that information now.

Jake Hagar goes and fights and AEW makes a big deal out of it even if he gets disqualified.

Severn coming in as a legit world champion and winning seven fights not being mentioned is very sad in my estimation.”

One of the reasons Severn was brought into the WWE was to start an inter-promotion feud between the NWA and WWE that fizzled out almost immediately. Douglass discusses the missed opportunities with Severn being NWA champion and his feud with Owen Hart.

“According to Dan, no one ever came to him and said “Hey, the NWA championship belt, would you consider trading that with some of the wrestlers on the roster? And do you have the freedom to do it?

Dan says he did. He feuded with Owen Hart for a large part of his time in the WWE. That sounds like it would have been a great opportunity to maybe drop the NWA title to Owen. Win it back the following week or following month, raise some intrigue in what both men are doing.

Sadly, we have to think of Owen in terms of what could have been because his life was cut tragically short, it could have created an opportunity for Owen to hold a world championship on WWE broadcast.

No one ever asked him and nothing ever happened.”

Douglass shared that Severn was eventually asked to stop bringing the belts to TV and his affiliation with the other organizations stopped being mentioned.

Check out the rest of the interview with Douglass, where he discusses more about Severn and working with former WWE performer Hornswoggle on his biography.