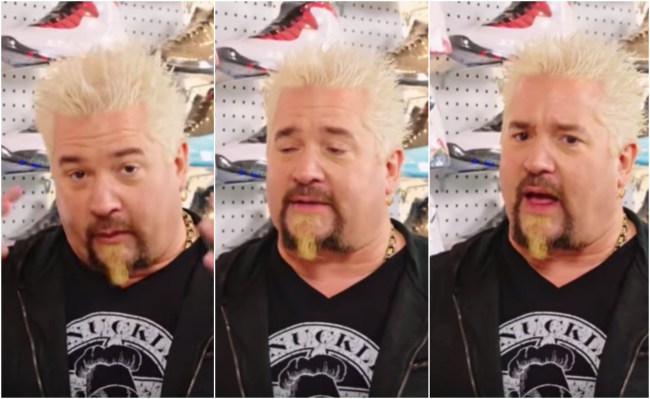 Guy Fieri is a big Golden State Warriors fan. He lives in Santa Rosa, California (Sonoma County) which isn’t too far from the Bay Area, so his love of the Warriors makes perfect sense.

Other things about Guy Fieri don’t make nearly as much sense, like his bleach blonde hair and multi-color dyed beard, his iconic shirt with flames on it, random ass catch phrases, and how Guy Fieri actually seems to be a pretty intelligent guy even though sometimes comports himself like one of the characters from Jersey Shore.

In the newest episode of Sneaker Shopping on YouTube, Guy Fieri goes shopping at Miami’s Fight Club. Presumably, Guy was in town for the recent South Beach Wine and Food Festival where Guy often puts on cooking demonstrations and hosts events.

I actually saw him there two or three years ago but didn’t realize who it was at first because I saw him from behind and all I could see was a dude with bleach blonde hair, wearing jewelry, and I think he was wearing a Detroit Pistons jersey at the time. Whatever it was, I just assumed he was some random ‘Florida Man’ until I walked by and realized it was the Major of Flavortown himself.

In this episode, Guy Fieri talks about his love of clothes with flames on it, Steph Curry hooking his kid up with special shoes even though they didn’t make his son’s size, the greatest culinary shoes of all time, and more.

Guy Fieri gets knocked on by countless people on the Internet but I feel like anytime you hear this guy talk you then you almost instantly realize he’s such a genuinely nice guy, and hard worker, that all of his success is well-deserved. Just because he looks like some dude who got waaaayyyyy too into Insane Clown Posse back in the day it doesn’t mean he deserves the criticism.

I’m right there with Guy Fieri and agree that Adidas is simply the best in 2019. Their lightweight shoes have the best soles for anyone who stays active all day. Their Flyknit comfort is unmatched. At this point, I’d almost be embarrassed to show anyone my closet because I’ve been buying so many adidas shoes over the past few years it looks like I have a problem.

That said, it also seems like Guy Fieri is equally as obsessed, he dropped almost $2200 on rare adidas in one outing.