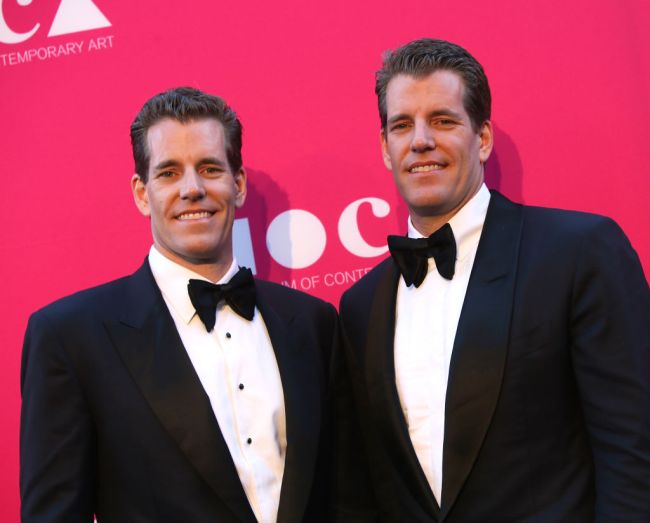 Bitcoin snagged an all-time high on Monday, notching a record price of $19,864, as reported by Fox Business. This cryptocurrency was higher than the previous record set in December 2017.

The Winklevoss have been outspoken proponents of the digital currency for years. Tyler and Cameron, who won $65 million from a lawsuit against Facebook and Mark Zuckerberg, invested $11 million in bitcoin all the way back in 2013. Two years later, the Winklevoss twins launched Gemini, “a private, licensed digital asset exchange that also offers custodian services for digital holdings.”

On Monday as Bitcoin continued its upwards swing, the Winklevoss twins appeared on CNBC’s Squawk Box, where they said that the best is yet to come in regards to Bitcoin.

“Our thesis is that Bitcoin is gold 2.0 and it will disrupt gold. If it does that it has to have a market cap of $9 trillion,” Tyler told interviewer Seema Mody. “So we think bitcoin could price one day at $500,000 a bitcoin. So at $18,000 bitcoin it’s a hold or if you don’t have any its a buy opportunity because we think there’s a 25x from here.”

“I think a lot of it is investors coming in and realizing that inflation, there’s a specter of inflation out there and how do you protect against that? I think there’s not much of a debate about all the debt that’s increased in the U.S., the money printing, so how do you defend against that?” Cameron asked. “I think a lot of people are starting to realize that bitcoin is really the best defense and offers the opportunity for an asymmetric return of something like 25 to 40x from here. I don’t think there’s an asset in the universe that can credibly offer that kind of potential and protect against inflation.”

“It doesn’t really need to be a great medium of exchange, it just needs to be better than gold and it’s better across the board,” Cameron said. “So bitcoin, the supply is fixed at 21 million. Gold is scarce. Bitcoin’s software it can be sent through the internet, like email, gold is hardware and its hard to transport.”

Mody asked the Winklevoss twins if they are concerned about government regulations being levied against the digital currency.

“Back in 2013, there was a question about whether bitcoin was going to be outlawed,” Tyler responded. “We’re way passed that. We believed in healthy, thoughtful regulation. We don’t see that not continuing. We think bitcoin’s here to stay, we think thoughtful regulation around it in the U.S. and other sophisticated jurisdictions is also here to stay.”

Bitcoin has had a history of being extraordinarily volatile.