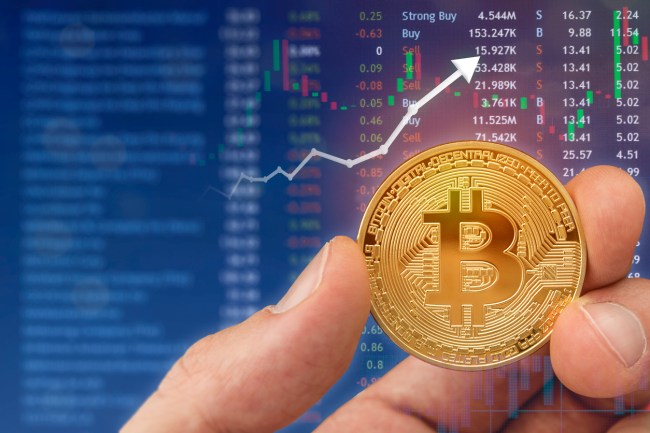 Looks like the late, great Thin Lizzy may be right: “The bulls are back in town.”

Do you hear that? It’s bitcoin skyrocketing. The cryptocurrency spiked twenty percent yesterday, topping $5k for the first time since mid-November.

The big question is, why?

There are multiple theories about bitcoin’s price surge, but let’s start with the most logical. It was a giant April fools joke. No, really. There were articles, like this one, claiming that regulators held an emergency meeting over the weekend to approve a bitcoin ETF. This caused trading algorithms to start buying based on fake news.

Another theory was that Warren Buffet, who may be the only person on earth to despise cryptocurrency more than Jamie Dimon, is diversifying Berkshire Hathaway’s assets and he is considering taking an interest in digital tokens. Of course, that’s about as likely as Gary Cohn leading Wells Fargo.

The real reason? A mystery order, to the tune of $100M, spread across three cryptocurrency exchanges: Coinbase, Kraken, and Bitstamp. This algorithmically-managed order, which amounted to 20k BTC, was spread out between the three exchanges.

In the words of JFK: a rise in tide lifts all boats.

“IF YOUR ERECTION SHOULD LAST LONGER THAN FOUR HOURS …”

Due in part to drugs like Viagra coming off patent and the clever use of “telemedicine,” startups like Hims and Kicks are making it easy for “guys being dudes” to get treated discretely for those “awkward conversation” ailments.

So what’s the issue?

Welp, unicorns like Hims are hawking drugs for off-label use, albeit with hilarious marketing (“Ending the bedroom fun a little too soon? Sertraline can help treat premature ejaculation so sex can last longer for both you and your partner.”). Sertraline, more commonly known as Zoloft is an antidepressant … which also happens to help one-pump-chumps up their game.

And Kick is marketing a blood pressure med, propranolol, to treat anxiety. The startup is targeting college students and other Nervous Nellies with the cure-all.

Here’s the thing: doctors can prescribe meds for off-label use at their discretion and in clinical trials, sertraline and propranolol have been proven to treat PE and anxiety, respectively. But is marketing the drugs for non-FDA approved uses kosher? The f*ck if we know.

What we do know

Hims, one of the biggest players in the space, raised $100M at a $1B valuation in January. Even more impressive? The company was just over a year old when it hit unicorn status.

Hims and its competitors including Kick and Roman face headwinds not unlike Uber and AirBnb which needed to effectively change consumers perception on their way to mainstream success.