BlackBerry Is Back; VW Goes Electric; Beyond Meat Files For IPO

BlackBerry, a company whose business plan had been defined by dumb-phone purists has taken its talents to the 21st century. The maker of the Crackberry is buying cybersecurity firm Cyclance for $1.4B as part of a larger push towards enterprise services and cybersecurity.

Cyclance was founded by McAfee and Intel alum and has differentiated itself in the crowded security space by incorporating artificial intelligence, machine learning, and other buzzworthy technological enhancements into its products. The glorified ad-blocker has raised nearly $300M to date and was expected to go public before BlackBerry came calling.

The former number one mobile phone provider of middle management had a rough go at it in the post-BBM world but has risen from the ashes under the astute leadership of John Chen. In addition to its push into the world of phishing and Nigerian Prince scams, BlackBerry has made a killing as a “patent troll“. Claiming more than 44k patents, mostly related to messaging and mobile phone developments, BlackBerry has made a business out of litigation aimed at its successors (think: Snap, Facebook etc.).

Water Cooler Talking Point: “It could be worse BlackBerry, you could have been responsible for the Amazon Fire Phone.” 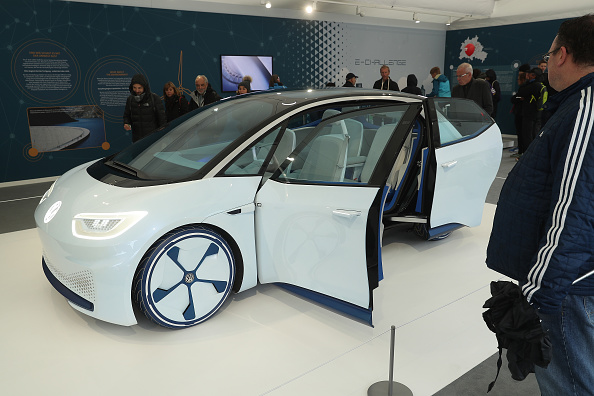 German carmaker Volkswagen has committed to spending $50B on electric and autonomous vehicles by 2023.

VW CEO Herbert Diess described the company’s strategy as an ‘electric offensive.’ Maybe the German should have chosen his words more carefully. The $50B is roughly $11.4B north of what the company set aside for new technologies according to last year’s budget, and Diess acknowledged that spending on new tech could initially harm earnings growth.

According to the maker of Phish fan’s van of choice, talks with Ford were “progressing positively” (translation: going nowhere). The two companies are currently working together on commercial electric vehicles but Diess sees the potential for more cooperation.

VWs first vehicle built under the new strategy, the ID, will begin rolling off assembly lines in 2022.

There’s gold in them patties! Beyond Meat, the El Segundo, CA-based vegan burger company, is filing for an IPO. The initial offering is expected to raise around $100M, but that number could change as we get closer to an official IPO date.

Beyond Meat, which is backed by the likes of Bill Gates and former McDonald’s CEO, Don Thompson, has been making meatless money since 2009. It was initially created to find a substitute for frozen chicken but has since turned its eyes to beef.

The company, which competes with Google-backed Impossible Foods, can be found in grocers like Kroger and Whole Foods, and residing on A&W Canada and TGI Friday’s menus. Currently Beyond Meats has a team of 40 scientists and chefs in its kitchens cooking up the stuff of Ron Swanson’s nightmares.