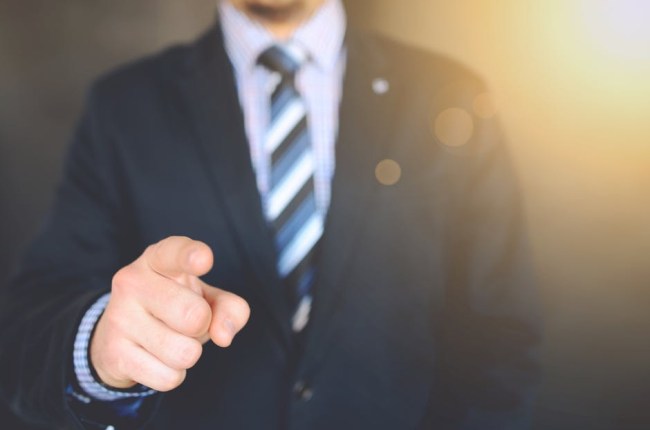 Career advice is sort of like bellybuttons: we all have it, but we don’t necessarily know what to do with it. Whether that’s taking tips from bosses, or paying close attention to how mentors maneuver, there’s no absolute way to get to where you want to in this world without going through it yourself.

All that said, guess what I’ve got for you? Yep, some career advice that you might want to take note of, because it’s a topic that might be happening right in front of you without any signs of it being a problem. What is it? As the headline says, insulting your boss.

Sure, there are direct ways to insult your boss — like telling him or her to f*ck off in a heated argument — but, more commonly, there are indirect ways in which your boss grows frustrated with you. As someone who has been another person’s boss before, I know I’ve hidden my feelings of being insulted or frustrated, because we’re human and don’t want to make it a big deal. But that doesn’t mean it’s not happening.

That’s where a recent article in The Ladders comes in to handy, as they turned to a career expert named Jill Tipograph, who added this about insulting a boss without knowing you’re doing it.

While we should all be diplomatic, respectful and thoughtful when dealing with others, sometimes we say things we should not have said or that hit a sensitivity that we did not foresee. Being sensitive to that and prepared to acknowledge our blunder is crucial to being respected by your manager, or anyone who might feel wronged”

The rest of the article explains various ways in which you may, in fact, be insulting your boss without knowing it, and here’s some career advice that you should definitely pay close attention to.

People make mistakes, guys, so don’t come across as all high and mighty by correcting your boss when he or she makes one. I get it, you want to show you’re on top of things, but doing so in a smug manner isn’t going to win you any points with your superior. Using suggesting rather than blatantly pointing out a mistake your boss made is the safer route to go.

Politics are some of the most controversial and touchy topics to talk about, so it’s best to just avoid them in any work environment. Much like religion, whatever your political views are should be kept to yourself, as things can become toxic in the office once the cat gets out of the bag.

According to The Ladders article, here’s what business coach Christine Argo had to say about the topic.

“Your boss will most likely recognize that debating politics at work is not appropriate, but your point of view may easily insult them and leave them less than enthused about working more closely with you on special projects. Unless you work in an environment where everyone’s political beliefs are clear, save your point of view for after work.”

While Argo suggests saving a point of view for after work, even then, politics may be too much to voice an opinion about.

You Assume Things About Them

Sure, spending 40-plus hours a week with coworkers naturally makes us chatty Cathy about our personal lives, but a major problem is when employees find themselves making assumptions about a boss based off the little they do know. For instance, if your boss just went through a breakup and crapped all over their ex, don’t feel it OK to lay it on over and over. That’s their problem, and it’s not your job to try and console them or assume they’re not working it out with the ex.

Want to know a quick and easy way to get on your bosses bad side? Cut them off from finishing a sentence. They may not know everything, but they deserve your respect, so allow them to ask a question or give instructions without having to deal with you chiming in.

Everyone wants to show their superior they’ve got the chops to finish a thought that was in the mind of the boss, but don’t be so anxious that you actually interrupt them from getting the idea out themselves.

Everyone is busy and meetings get moved around all the time, but when you’ve made being late your M.O., that’s when your boss might begin to get frustrated with you. In essence, it tells them, fair or not, that your time is more valuable than someone else’s, and that you’ll come up with any excuse in the book to justify your tardiness.

Of any career advice out there, being on time is the one thing that should never be taken lightly, because, like baseball, after three strikes, you’re usually out. And, yes, that may be all it takes for your boss to feel so insulted that he or she cans you for not doing your job the right way.

Overall, The Ladders article offers up seven different ways you may be indirectly insulting your boss, so head on over to their website to see the rest of the career advice, it may help you keep that job of yours, bro.