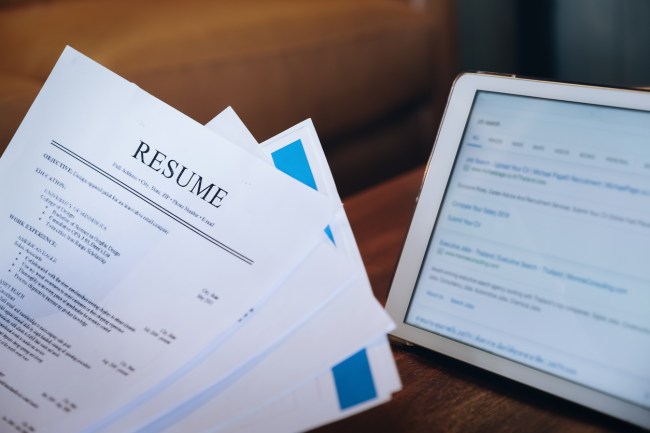 If you were laid off would you A.) Sulk and eat ice cream, B.) Apply for jobs that you’re not qualified for so you don’t ever get a new job, C.) Watch Netflix all day or D.) Stand on a blazing hot road and hand out resumes all day? For this Phoenix dad, he took the latter option that nearly everyone would never even contemplate, let alone do.

Patrick Hoagland of Phoenix, Arizona, was laid off as a forklift operator at a metal recycling company only a few weeks ago. After applying for several jobs online and knocking on the doors of local businesses, Patrick was still without a job.

Despite trying to get a job, all of Patrick’s efforts were not paying the bills. So the 30-year-old father literally hit the streets to find a job. Not just any streets, the 110-degree streets of scalding Phoenix in August.

Patrick stood on a busy roadway in Phoenix and handed out his resume to anyone who passed by.

“I had only been unemployed a few weeks, but it was very unexpected and I needed to figure something out fast,” Hoagland said. “I at first laughed and thought that was silly, but I kept thinking about it. I figured, why not?! There are millions of people in Phoenix driving around, someone might hire me.”

Patrick printed 200 resumes and one woman gladly took his resume, Melissa DiGianfilippo. She owns a marketing and PR agency and was especially impressed by Patrick’s creativity.

“I gestured for him to come over, grabbed his resume, and the light changed, so I had no time to talk to him,” said DiGianfilippo.

“I was impressed with Patrick because it was 110° outside and what I saw was really unexpected,” DiGianfilippo said. “He was standing on the side of the road with a sign and a stack of resumes and a huge smile on his face.”

While Hoagland’s work experience wasn’t suited for her area of expertise, she decided to get the word out that Patrick was looking for a job.

She posted his resume on Twitter with the caption: “I was driving down Camelback Rd in Phx near my office and saw this guy on the side of the road with a smile in 110-degree heat, with a sign asking people to take his resume. I love that he was not asking for a handout, just for people to consider him for a job. #pleaseshare #job”

I was driving down Camelback Rd in Phx near my office and saw this guy on the side of the road with a smile in 110-degree heat, with a sign asking people to take his resume. I love that he was not asking for a handout, just for people to consider him for a job. #pleaseshare #job pic.twitter.com/5QAUpCkGWk

“I just thought, I have a wide network so I’ll post it on social media and see what happens and it was crazy. It blew up,” said DiGianfilippo.

The tweet was Liked over 1,300 times. Soon enough, Fox 35 Phoenix and Good Morning America were sharing Patrick’s quest for a new job.

AWESOME! Patrick Hoagland was laid off. Instead of asking for money at an intersection, he was asking for a job! Congrats, Patrick! https://t.co/RvAsARScz9

Dad who was laid off gets hundreds of job offers after handing out resumes on street. https://t.co/Pc3tJUEK84 pic.twitter.com/Nb8pHrNk5W

“I was definitely hoping he would get some good job leads out of the post, but I definitely did not anticipate it blowing up in the way it did!,” DiGianfilippo said. “The post on LinkedIn is what really has taken off the most, generating thousands and thousands of re-shares, reactions, and likes.

“I also posted it as an Instagram story which got a ton of engagements and people wanting to reach out to him, on Facebook and on Twitter,” she added. “I am so amazed by how many people re-shared the post because they really wanted to be a part of a positive story.”

After a few days, Patrick not only received thousands of messages from people wishing him good luck, but he also received hundreds of job offers.

“It was crazy. It was hard to navigate my phone for a little bit, but I received so many great offers,” Hoagland said. “I received offers from companies that wouldn’t hire you without experience, but because they saw my determination, they offered me a position without even an interview.”

After weighing all of his options, Hoagland finally decided to work with Flatline Concrete Grinding in Phoenix.

“I think in general this is a good reminder for people that it takes just a few minutes sometimes out of your day to really change someone’s life or make their day better,” DiGianfilippo said.

“She has been so great, she didn’t need to help me, but she did and it has changed my life,” Patrick said of Melissa. “I am so grateful for her.”