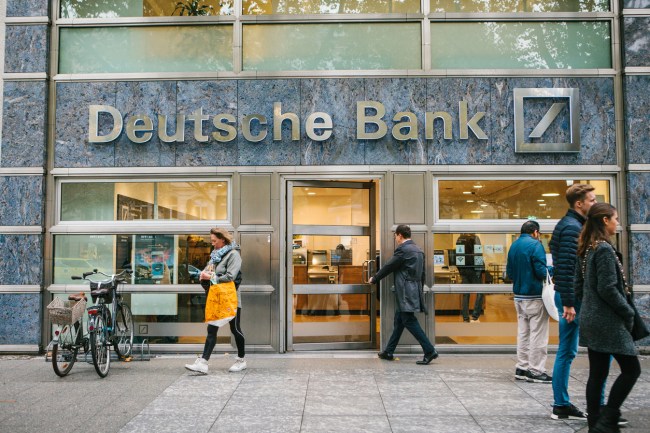 Germany’s two largest banks, Deutsche Bank and Commerzbank are having “the talk.” You know, the “what are we” talk. Apparently, the German government has come to terms with potential (read: definite) job and cost cuts and gave DB and Commerz the green light to discuss becoming more than friends.

Were the two lenders to become official, they would create the 4th largest European lender with combined assets of $2.05T. But remember, “past performance is no guarantee of future results.”

Just because merging is an option, doesn’t mean it makes sense. This merger is kinda like the speedball of financial institution mergers … just because you’ve heard good things about the ingredients separately (note: TWC does not condone drug use) doesn’t mean they’ll be better together.

Each bank brings its own baggage to the table. DB and Commerz have lost more than 90% of their market value since their respective peaks and can be labeled fundamentally flawed … and to an extent, victims of circumstance. A weakening European economy and the ECB’s plans to push off an expected interest rate hike aren’t doing the banks any favors.

Deutsche Bank hardly goes a day without grabbing a headline about the wheels falling completely off another LOB. Case in point: sh*t is hitting the fan at DB’s once lucrative prime services biz as reported last week.

And Commerz has more or less never recovered from its wounds suffered during the 2008 financial crisis. In fact, the German government still owns more than 15% of Commerz, a stake acquired during the meltdown.

Everyone makes mistakes. We are only human after all. But if your mistakes result in one of the biggest bank collapses of the Great Recession, then surely there should be consequences …

PricewaterhouseCoopers best be getting its checkbook out, as the FDIC reached a $335M settlement, with the accountancy related to its ‘thorough auditing,’ if you want to call it that, of failed financial institution Colonial Bank. Some (read: everyone) might call the fine a slap on the wrist considering the failures economic cost …

Turn back the clock

PwC and Crowe Horwath both audited Colonial Bank in the time leading up to its collapse. Colonial Bank purchased more than $1B in mortgages from mortgage lender Taylor, Bean & Whitaker … that were not actually owned by Taylor Bean. Unbeknownst to Colonial and its auditors, the bank was wrapped up in one of the largest fraud cases in history.

According to the FDIC, if PwC and Crowe were doing their jobs, they would have noticed the glaring holes in Colonial’s balance sheet. Because of the negligence, Colonial was duped for more than seven years before its collapse.

Colonial had $22B in assets and $20B in deposits when BB&T took over Colonial’s operations following its failure in 2009. Colonial’s collapse cost the FDIC nearly $3B. And since karma’s a b*tch, the mastermind of the fraud, former Taylor Bean exec Lee Farkas, is spending 30 years behind bars. Colonial leadership was not found guilty.

The SEC has sued Volkswagen and former Board Chair, Martin Winterkorn, claiming that the manufacturer raised $13B via bond sales while making false claims about the environmental impact of “clean diesel” fuel.

VW has been serving penance since getting caught in 2015 for making and distributing diesel vehicles that it knew was not compliant with Uncle Sam’s emissions standards. Over 500k vehicles in the US were equipped with a system (called a “defeat device”) that would identify and pass Environmental Protection Agency testing but revert back to poor performance during actual output. If you need a recap, here’s how it all went down.

These new charges certainly aren’t VW’s first time in Johnny Law’s crosshairs. But the latest claims are the first to focus on securities fraud as the company used false claims to secure funding via the bond market.

In total, VW has already pleaded guilty to the charges and paid at least $25B in penalties for the deceptive practices. Despite the fact that said practices do seem to be the driving force behind bond issuance, Das Auto seems to think that it is in the clear since the bondholders got the money promised.