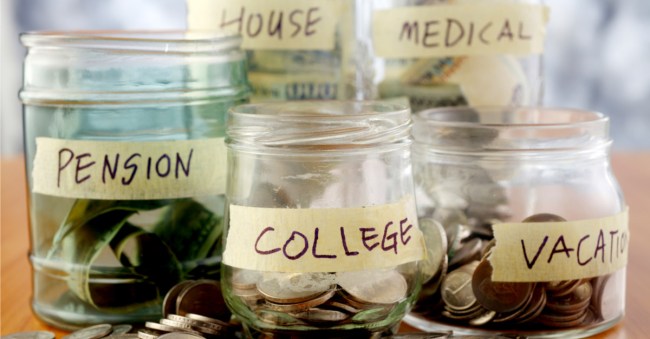 We’ve all been there, wondering how much money we should be putting away for retirement. Should I be saving more money now or can it wait? How much should I be saving at my age? And most importantly, will I have enough to live on when I turn into an old geezer?

The answer to all of those questions, for most people, are somewhat of a mystery and always will be in some regard because none of us has any idea what the economy will look like when we actually do reach retirement age.

That doesn’t mean we can’t hedge our bets to the best of our ability though. We just need to know where to start.

According to the folks over at Two Cents, who compiled some suggestions on money-saving from Fidelity, Morgan Stanley, Vanguard and Charles Schwab, there are actually a few useful rules of thumb.

Here’s a handy little chart that displays exactly what they recommend.

Vanguard suggests saving 12 to 15% of your salary each year, while Schwab, well, their formula is a bit more complex.

Regardless of which method you choose for your retirement planning, the important thing is to do “something.”

Because, according to Schwab, “A report by the U.S. Government Accountability Office found that nearly a third of households aged 55 or older had no retirement savings at all.”

Luckily, they all also point out that it’s never too late to get started.

Plan to spend at least 30 years in retirement—longer if you think you’ll retire early. Medical advances are consistently extending the average lifespan.

Even if you don’t plan to retire early, illness or other responsibilities could prevent you from working as long as you expected, extending your retirement on both ends.

So basically, the short answer as to how much money you should have saved at every age varies, but putting aside some savings, of any kind, is most certainly better than doing nothing.