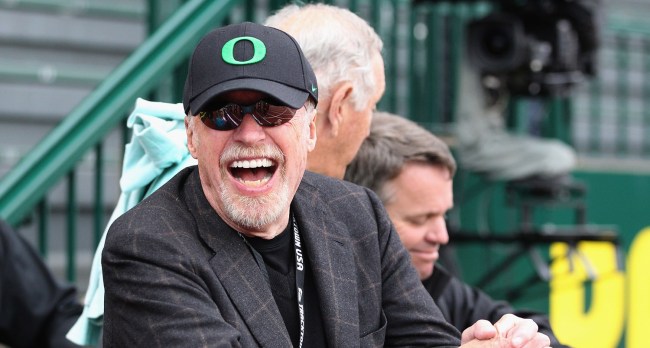 You know how you have too much money? One, your name is Floyd Mayweather. Or, two, you give away a BILLION DOLLARS to charity like Nike co-founder Phil Knight just did.

The 80-year-old Knight, who has already given away over $2 billion dollars to the University of Oregon, Stanford University, and Oregon Health & Science University, donated around $1 billion of Nike shares to an unnamed charity last Wednesday.

Knight, 80, Nike’s founder and chairman emeritus, gave 12 million shares, according to a regulatory filing that didn’t identify the beneficiary beyond noting that he and his wife Penelope are directors of the entity.

This latest donation of 0.7 percent of the Nike’s outstanding shares was worth about $990 million at the time it was made. It also represents about 3.1 percent of Knight’s $32 billion fortune, according to the Bloomberg Billionaires Index.

Knight still has some work to do though if he wants to catch up to Bill Gates who just last August alone donated a whopping $4.6 billion to charity.