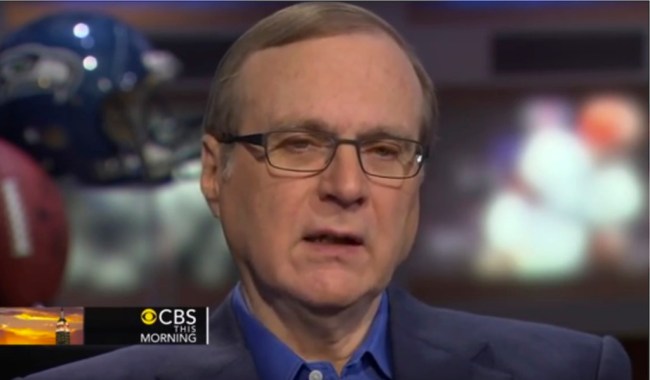 Billionaire tech mogul Paul Allen sadly passed away at the age of 65 the other day, ultimately losing his battle from complications of non-Hodgkin’s lymphoma. One of the co-founder’s of Microsoft way back when was an influencing figure in both his hometown of Seattle, Wa. as well as around the world, even donating $2 billion for education in science and technology. But, hey, when you’ve got a net worth of a reported $20.3 billion, giving away 10 percent of it to help innovate the future is nothing at all, right?

While Paul Allen may have looked at $2 billion as chump change to inspire the future of science and technology, us “normal folks” know that it’s a ton of cash to just give away — but it’s still only half of what the sports teams Allen owns are expected to command now that they’re up for sale.

According to Forbes, Paul Allen’s minority stake in his sports teams, which include the Seattle Seahawks, Portland Trail Blazers and Seattle Sounders, will likely sell for more than $4 billion combined within the next year or so. Paul Allen’s sister, Jody, is the person who’s in control of his trust, which is part of Vulcan Inc.

The Forbes article goes on to project how much Allen’s sports teams are projected to be sold for, with the Seahawks expected to command a record sale for any sports team ever, that, per Forbes, would squash the current record of $2.3 billion that David Tepper spent on the Carolina Panthers last year.

Here’s what Forbes had to say about its projections:

The NFL’s Seahawks, I reckon, will be sold for about $2.6 billion, which would be a record for any sports team (see table below) and $300 million more than the Carolina Panthers went for earlier this year. The NBA’s Trail Blazers will change hands for $1.3 billion or thereabouts. And Allen’sestimated 20 percent stake in Major League Soccer’s Sounders is likely worth some $60 million.

Oh, and if you want to know the return on Paul Allen’s investment with those three pro sports teams, it’s ridiculous. In 1988, Allen paid $70 million for the Trail Blazers. In 1997 he dropped a cool $194 million on the Seahawks. And he was one of the original owners of the Sounders when the came into the MLS in 2007, which, was previously ranked as the most valuable MLS franchise by Forbes in 2015. When you add all that up, Paul Allen will earn around $3.74 billion — although that’s not including the amount he paid for the Sounders. Still, Paul Allen’s ROI will be in the billions on his sports teams sales alone.

For all those hopeful lottery winners — with the combined jackpot of the Mega Millions And Powerball topping $1 billion — I’ve got something you might be interested in purchasing.