Don’t Feel Like Doing Crap? Try A Few Of These Proven Methods To Force Your Brain Into Getting Work Done 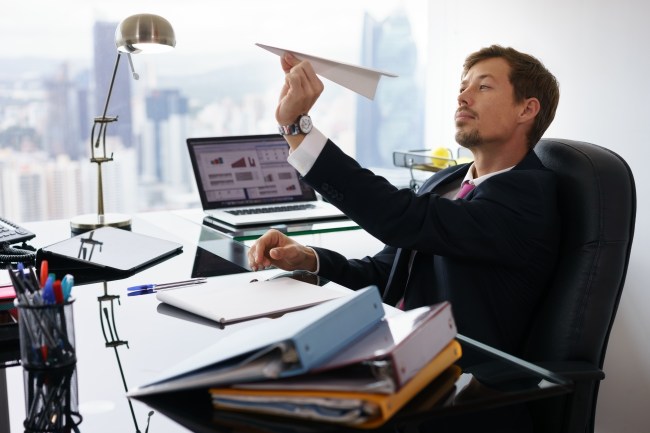 Have you ever reached the point in the day where it’s mentally impossible to get any more work done yet you feel as though you’ve done nothing at all?

People regularly feel stressed and overworked even when they’re doing no work at all.

At Adobe’s 99U conference, UC Berkeley cognitive neuroscientist Sahar Yousef spoke to an audience about procrastination and new ways to trick the brain into getting stuff done.

Business Insider took note of Yousef’s suggestions and put together a list of 10 ways to trick your brain into being more productive.

Ask For An Office Or Work In A Conference Room

For decades, workers complained about being boxed in cubicles. It turns out, employees were much better off being sequestered in half-walls.

“The human brain isn’t designed to be in a massive open space,” Yousef said. “You’re physiologically more stressed out. It’s like trying to get work done at a daycare center.”

These Harvard researchers agree- their studies found that in open offices, “face-to-face interaction time got cut by a factor of four, and workers sent 56% more emails at double the length.”

The best definition for multitasking is “doing many things poorly instead of one thing correctly.” Plus there’s the time wasted moving from task to task where the brain is actively trying to concentrate on the new assignment.

The time wasted in switching between tasks is called a “switch cost.”

“Every single time we switch there is a cost,” Yousef said. “It’s draining. It’s taking longer to do the same thing.”

Instead of trying to do many things at once, schedule tasks one at a time. Sit down and schedule each task and do ONLY that task.

The most straightforward analogy to explain this next brain hack tip is to picture a massive flight of stairs. You’ve got to make it to the top. How do you get there?

“‘The root cause of procrastination is fear,’ Yousef said. ‘When you have a mountain of tasks in front of you, you think it’s never going to get done anyway and start procrastinating. It’s when the task in front of us looks so big that we start to do silly things, saying ‘I’m not enough for the task.'”

Break down the most substantial tasks into smaller tasks by asking yourself “what can I do for just 5 minutes that will move the project forward?” and do just that.

There’s a good chance once you start for 5 minutes you’ll just keep going.

If you’re one of those people who “needs” a cup of coffee first thing in the morning – and another when you get into the office – you’re actually doing yourself a disservice.

The caffeine is doing nothing for you.

“Humans typically already have energy right when they wake up, and throwing more coffee on top of your energy won’t help. Instead, for people who have average circadian rhythms (your body’s internal clock), the best times to have caffeine are at 10 am and 1 pm, or after lunch.”

So save the coffee until after lunch when you’re sluggish as hell.

Business Insider suggests a few other hacks like automating your easiest decisions – like what to wear to work or eat for lunch – finding your peak performance times, writing down all your tasks and turning off the notifications on your phone.

Give as many of these ideas a try, and you’re sure to see a drastic improvement in your workday.