Whether he’d call himself it or not, Ryan Graves is very clearly a surf Bro. He is also a billionaire, with Forbes estimating Ryan Graves net worth at $1.6 billion, as of May 2019.

When the Forbes Billionaire list was released in 2015, Ryan Graves was one of the new names on the list. Originally from San Diego, Graves is one of the first employees hired at Uber, the car service estimated to be worth an estimated $41.2 billion in December. He got the job in 2010 by tweeting “hire me” to Uber’s founder, Travis Kalanick, about a business development opportunity at the start-up: 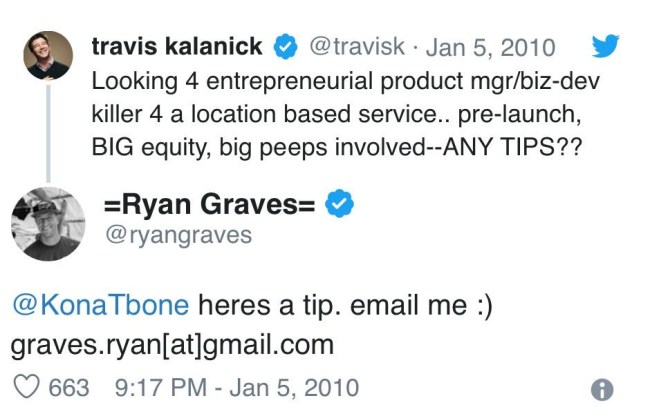 Graves responded “hire me :)” on Twitter. That caught Travis’s attention and the rest is American Dream history.

Forbes estimates Graves stake in Uber is BIG, putting his net worth at $1.4 billion in 2015 (for comparison’s sake, Uber’s co-founder, CEO Tracis Kalanick and cofounder Garrett Camp are estimated to be worth $5.3 billion a piece). Before he landed at Uber, he held a few unsexy jobs and was ready to roll the dice with a career at a start-up:

Before Uber, Graves held an “unglamorous” position at General Electric without much growth potential, he told DailyFinance. He eventually hustled an internship at Foursquare by pretending to work for them after they turned him down for a job. Just a few months later, he tweeted the billion-dollar tweet.

Graves is originally from San Diego, studying economics at Miami University before his handful of tech start-up jobs.

Graves went on to be the head of Uber’s global operations, overseeing the company’s expansion into hundreds of cities around the United States and 55 countries. He was briefly CEO of the company in 2010 before Kalanick stepped into the position. In a blog post announcing the move, Graves and Kalanick even phrased their internal business shuffle like true surf Bros.

“Personally, I’m super pumped about how well rounded the team has become with Travis on board full time. After working shoulder to shoulder with Travis in a mentor/mentee capacity, it’s obvious to me that this partnership is the right one, and puts Uber in a very strong position to take our early successes and turn them into a huge business.”

Ryan, thanks for kind words. I’m frickin’ pumped to be on board full-time with Uber! After a two-year recharge as an angel investor – following 15 years of entrepreneuring – I am ready to get back in the game. But being ready isn’t enough – founding and running a startup is in my blood, but as everyone who’s done it knows, it requires real sacrifices, long, long hours and it can be an neverending road. When the fit is right though, the choice becomes easy to make.

Love it or hate it, almost a decade later, Uber has changed the world with it’s rideshare business, IPOing to the public market.

Just a bunch of surfer/start-up Bros being SUPER PUMPED and SO STOKED at how things are going. Dangerous levels of entrepreneurial “stoked”-ness. The start-up Bros approve:

Graves’ story is an aspirational one and a wonderful example of a small time surf Bro prospering big time in the tech/business ocean.

And all it took was shooting his shot on Twitter, for all the world to see.

Start-up careers are a wave. Take the ride, live the dream…