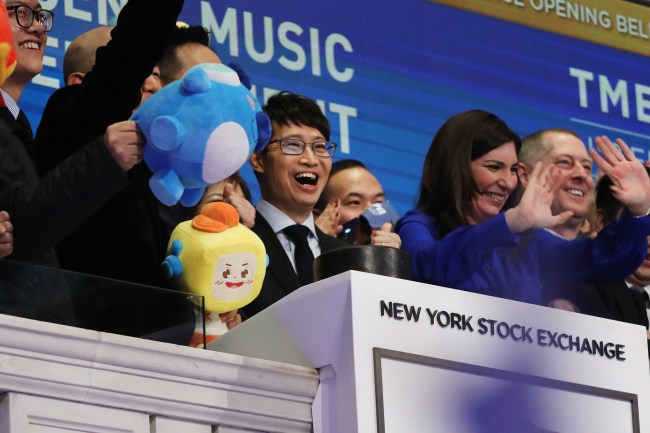 It’s competition. Tencent Music has finally gone public after delaying its initial attempt at an IPO in October. The listing raised the company an estimated $1.1B.

Tencent Music priced its IPO at $13, the low end of its potential listing price, valuing the company at $21.3B, just shy of Spotify’s $23.7B. Shares of Tencent Music closed up 8% on the day. Early estimates had pegged the valuation somewhere in the $25B to $30B range.

The Chinese streaming giant claims about 800M active users, with about 35M suckers paying for the opportunity.

Tencent, the market leader in Chinese music, owns a 9% stake in Spotify, and vice versa. That is until the White House decides we can’t risk the Chinese hacking national treasures like Limp Bizkit and Len.

Water Cooler Talking Point: “If you’re locked into the Apple ecosystem with a pair of unbreakable handcuffs, none of this matters anyway. Siri, play Apple Music.”

If there’s one thing that takes Paul Singer from six to midnight it’s a family controlled business with a board that needs shaking up and margins to be had. Singer’s Elliot Management, a $35B activist investment fund is licking its chops after a $1.05B investment in Pernod Ricard.

Pernod, the maker of Beefeater, Chivas and Absolut hasn’t taken advantage of its spirit focused portfolio in a favorable liquor market. Case in point: the company’s operating margins lag Diageo by 5%.

Via its 2.5% stake Elliot looks to suck profits from the company like the witches in ‘Hocus Pocus’ did virgin souls. And good news for the Ricard family who still owns 15% of the company: Singer has plenty of unsolicited “constructive feedback …”

Singer plans to inject the board and management with “outside perspective,” hedgie talk for “you’ll wish your grandfather Picard was never born.” But Singer pinky promises that he won’t dethrone CEO Alex Ricard, grandson of founder Paul Ricard, or force a sale.

US investigators think they have tracked down the mastermind behind the breach: *Cue Dr. Evil Laugh* China. And they aren’t accusing some back-alley bitcoin hackers here. The gumshoes on the case are claiming the hackers are backed by the Chinese Ministry of State.

See, Marriott is the preferred hotel of US Government officials worldwide. If someone, say a foreign power who is in a war of trade restrictions with the land of the free and the home of the brave, wanted to build a database of government official’s private information, hacking a hotel database is a good place to start. You know they’re hoovering points on Uncle Sam’s dime.

The claims argue, while lacking hard “evidence,” that the attacks resemble similar techniques that have been traced to other Chinese state hacks in the past.

Water Cooler Talking Point: “We will trade you one Huawei exec if you promise not to expose our incognito browsing history …”