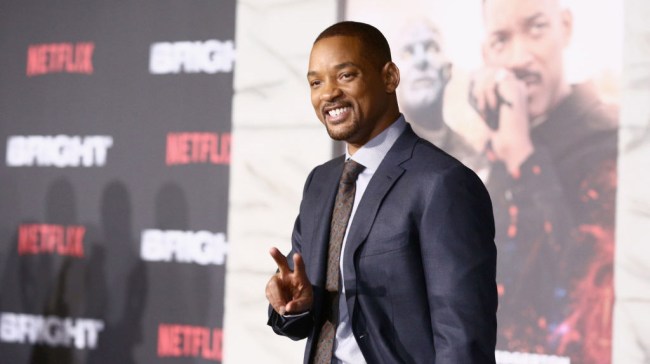 Will Smith seems like a pretty happy guy, right? He’s also pretty darn successful too, isn’t he? Not a bad combo. Happy and successful. Sounds like the kind of guy who might be a good person to give advice about how to do well in life, no?

Well, we’re in luck today because not only did Will Smith, who I don’t think I have ever seen without a smile on his face (unless he’s wearing a mask), share his philosophy for success in life, but he also shared some stories about other stars like Tom Cruise and Arnold Schwarzenegger, the latter of which gave him some advice that shaped how he approached his goals forever.

As Smith was making rounds on the press tour for his Netflix film Bright, he shared a story of how there was a 10-year period where he and Cruise used to battle to see who could stay on the red carpet the longest, signing autographs and seeing who could meet the most fans.

“Because Tom is not actually a human,” joked Smith. “He stayed on the red carpet for three-and-a-half hours one time. Then I just let him win because I see he was willing to die.”

Then Smith shared a story about how he once found himself in a room with Arnold Schwarzenegger, Bruce Willis and Sylvester Stallone. Yeah…

Naturally, Smith could pass up this opportunity to pick their brains so he asked, “Okay, I want to be the biggest movie star in the world and I need you guys to tell me how to do it.”

Schwarzenegger responded by telling Smith, “If your movie is only big in America, it doesn’t matter. You’ll be a movie star only when you are a movie star in every country in the world. You have to travel, you have to go meet the people.”

And that became the way Smith thought about his career from that point on.

“It’s hugely important that if you have a dream, that you have to dedicate your life to it and every hour of every day has to be dedicated to bringing into fruition the things that you dream about.”

Smith also shared in the video below that “at the core of everything” he’s done has been “how do we improve lives?”

Making friends and connecting with people is what Smith says he tries to do most when he’s out promoting his projects.

It’s definitely worked, because as I said in the beginning, Will Smith seems like a pretty happy and successful guy.