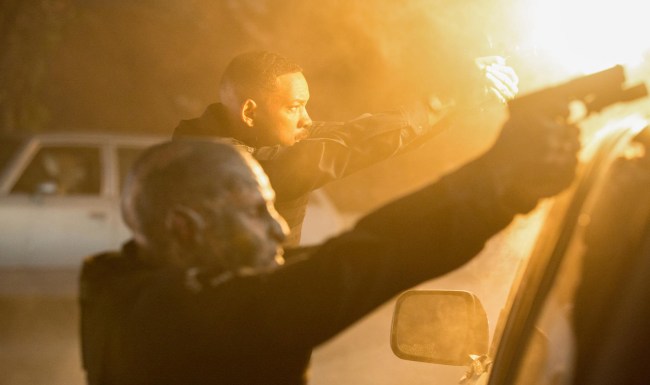 Back in March of 2016, Deadline reported that Netflix was the winner of a two-week bidding battle for a new film starring Will Smith called Bright.

Netflix’s Ted Sarandos got a big ticket feature, and he paid a premium for it. I’m told that Netflix will invest north of $90M in the entire package. That includes north of $3M for the Landis script, making it one of the largest spec deals for a writer in years.
…
This deal dwarfs by one-third the premium that Netflix paid to get the David Michod-directed War Machine, starring and produced by Brad Pitt.

Fast forward a year and a half and Bright is now complete and almost set for release.

Set in an alternate present-day where humans, orcs, elves, and fairies have been co-existing since the beginning of time. Bright is a genre-bending action movie that follows two cops from very different backgrounds. Ward (Will Smith) and Jakoby (Joel Edgerton) embark on a routine patrol night and encounter a darkness that will ultimately alter the future and their world as they know it.

The first trailer we saw for Bright back in February was described by BroBible’s Brandon as “trippy as hell.”

As you will see below, the second trailer for Bright more than doubles down on the trippiness factor.

Bright will be available in select theaters and on Netflix starting December 22nd, 2017.