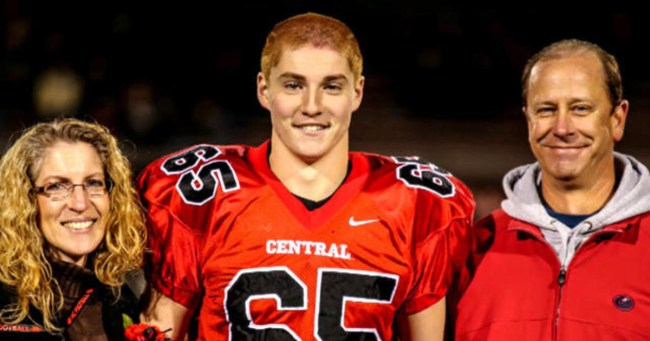 There are 18 Penn State fraternity brothers who are facing charges in connection with the death of a pledge, who died after falling down a flight of stars at the frat house. New and disturbing details on the death of the pledge detail how the fraternity members could have prevented Timothy Piazza’s death and tried to cover up the hazing.

During the pledge ceremony, Piazza ran through an obstacle course of various drinking stations where he drank vodka, beer, and wine. However, the pledge fell head-first down a flight of stairs and instead of calling for help, the frat brothers attempted to hide the hazing ritual and even came up with a fake story.

On the morning of Feb. 3, police were called to the Beta Theta Pi fraternity house. Authorities were called approximately 12 hours after Piazza suffered from his initial injuries from falling down the stairs. Piazza was immediately hospitalized, but was pronounced dead in the early hours of Feb. 4.

A grand jury report, which used evidence from testimony, phone records, and surveillance cameras tell a grim story where Timothy’s death may have been preventable.

Here is a timeline of the deadly night from ABC News:

On the night of Feb. 2, Piazza engaged in drinking as a part of a pledge ritual and his blood alcohol content reached between .28 and .36.

His fall was not captured on surveillance cameras but someone heard it, and when one man went to the top of the basement stairs, he saw Piazza lying face-down at the bottom of the steps. In a group message to other fraternity brothers at 11:53 p.m. that night, that man wrote, “Tim Piazza might actually be a problem. He fell 15 feet down a flight of stairs, hair-first, going to need help.”

Surveillance video at 10:47 p.m. showed Piazza being carried upstairs by four fraternity brothers; in the video, his body appeared limp, his eyes were closed, he appeared unconscious and a bruise was visible on his side. Piazza was placed on a couch and liquid was dumped on his face twice, but he didn’t respond either time.

About a half an hour after the fall, at 11:14 p.m., a newly initiated member saw Piazza lying on the couch, looking “horrible,” he later told the grand jury. He saw Piazza “thrashing and making weird movements on the couch” and screamed at the fraternity brothers for help, stressing that Piazza needed to go to the hospital because he could have a concussion. One brother shoved the newly initiated member into a wall and said they had it under control.

At 11:25 p.m., the pledge master slapped Piazza three times in the face. At 11:37 p.m., one fraternity brother tackled another brother into the couch, physically landing on top of Piazza.

By 1 a.m., some brothers saw Piazza vomit and twitch on the couch. Three brothers filled a backpack with books and placed it on Piazza to try to keep him from rolling to his back if he passed out. At 1:48 a.m., Piazza rolled off the couch and to the floor, and three brothers picked him up and “slammed him onto the couch.” One brother hit Piazza hard once in the abdomen.

By 2:38 a.m., Piazza rolled to the floor and at 3:16 p.m. his legs were moving. At 3:22 p.m., Piazza tried to stand and the backpack came off and he fell back, hitting his head on the hardwood floor. A fraternity brother attempted to shake him for a moment and then left the room.

At 3:46 a.m., Piazza was curled up on the floor in the fetal position with his knees toward his chest. At 3:49 a.m., Piazza positioned himself on his knees, bent over with his elbows on the floor and his head in his hands. At 3:54 a.m., he tried to stand but fell face-down onto the floor. At 4:59 a.m., he stood and then fell head-first into an iron railing, landing on a stone floor.

“He gets up again and attempts to go to the front door but before he reaches it he falls head-first into the door,” the grand jury report says. He later rolled to his side, clutching his abdomen.

At about 10 a.m., fraternity members found the 19-year-old in the basement lying on his back, breathing heavily and with blood on his face. One brother said Piazza’s eyes were half open and he felt cold. Three men carried Piazza’s unconscious body upstairs and placed him back on the couch. Surveillance footage showed brothers shaking him and trying to prop him up. At 10:48 a.m., a fraternity member called 911 but did not say Piazza fell down the stairs the night before

The grand jury discovered evidence of the fraternity attempting to hide the hazing and underage drinking. Members deleted incriminating messages from their phones and discussed erasing the surveillance video.

One deleted text that was recovered said, “If need be, just tell them what I told you guys, found him behind [a bar] the next morning at around 10 a.m., and he was freezing-cold, but we decided to call 911 instantly, because the kid’s health was paramount.”

The grand jury concluded that Piazza’s death wasn’t the result of a simple mistake but rather a “direct result of the extremely reckless conduct of members of the Beta Fraternity who operated within the permissive atmosphere fostered” by Penn State’s Interfraternity Council.

The grand jury also found that the fraternity forced drinking and paddling, and that Penn State’s Greek community “nurtured an environment so permissive of excessive drinking and hazing that it emboldened its members to repeatedly act with reckless disregard to human life.”

Penn State permanently banned Beta Theta Pi on March 30 for a “persistent pattern” of excessive drinking, drug use, and hazing.

In a statement, Penn State President Eric Barron said, “The details alleged in these findings are heart-wrenching and incomprehensible. The University community continues to mourn his tragic death, but no pain we feel can begin to compare to the devastating heartbreak that Timothy’s family and friends are experiencing.”

“This is a very sad day for Centre County — it’s been sad ever since we lost a child for reasons that are totally preventable,” District Attorney Stacy Parks Miller said.

“This didn’t have to happen,” said Timothy’s father, Jim Piazza. “This is the result of a feeling of entitlement, flagrant disobedience of the law and disregard for moral values that was then exacerbated by egregious acts of self-preservation.”

Jim said Timothy was an “incredible young man and an excellent student who had a very bright and promising future.”

“We’re devastated by the loss of our son,” Piazza said.

“No parents should have to deal with this,” he said.