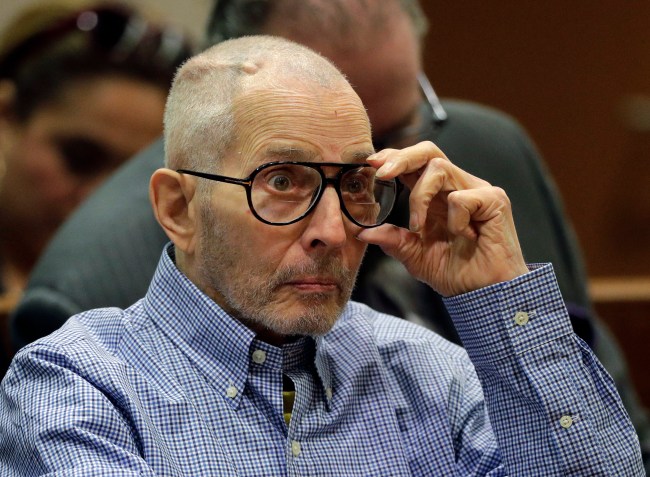 “What the hell did I do? Killed them all, of course.”

For those who watched HBO’s groundbreaking 2015 six-part documentary, The Jinx, you may still hear this confession ringing in your head at night, haunting your dreams.

$100 million real estate heir and quite possibly the world’s creepiest human being Robert Durst seemingly confessed to killing family friend Susan Berman, neighbor Morris Black, and his wife on a hot mic while on his way to the bathroom during an interview break with the show’s producer and director Andrew Jarecki. The confession came at the end of the last episode and after Durst vehemently denied any malice or wrongdoing in the previous five episodes, causing many to believe that this clean resolution was too juicy to be real.

Welp, according to the New York Times, Durst’s ‘confession’ was significantly edited. The two sentences that catapulted the series to a Peabody and two Emmys were not consecutive, but cobbled together from 20 sentences in his ramblings and presented out of order.

Mr. Durst’s lawyers are now preparing to cite those edits — they’ll call them manipulations — in an effort to cripple his prosecution as they get ready for a trial set to begin in a few months in California. They are planning to call the documentary filmmakers as witnesses and to suggest that they cooperated so closely with the police that they became, in effect, “agents for law enforcement.”

The filmmakers reportedly defend their actions by claiming their edits were indicative of what Durst said.

Mark J. Harris, an Academy Award-winning filmmaker, believes that the minds behind The Jinx used dirty tricks that are taboo in documentary filmmaking.

“The editing is problematic,” Mr. Harris said. “They put those lines together in a way that’s very damning. But it is definitely more ambiguous in the transcript.”

The 76-year-old Durst has spent the last few years in a Los Angeles jail cell. Durst’s murder trial is set to kick off in September.