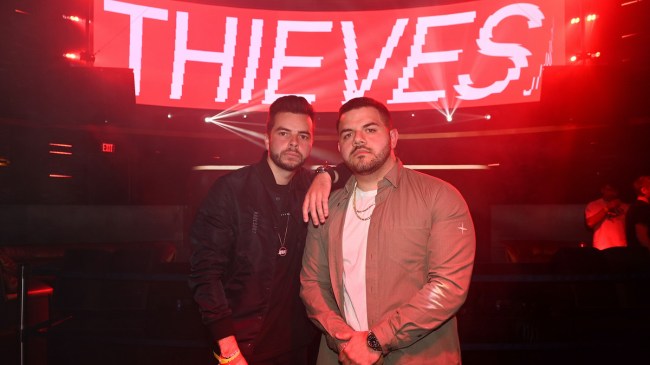 100 Thieves’ popularity has surged in the gaming scene, but the org was recently under fire after a former content creator blasted them for “predatory” practices.

The success of 100T has largely been in part due to its diverse roster of content creators. They signed “The Mob” in 2019, which consisted of Froste, Classify, Mako, and Avalanche. However, after two years, the group parted ways and it appears the split was not on the best of terms for everyone.

Late on Monday night, Erind “Froste” Puka tweeted about his experiences under 100 Thieves. While reminiscing about the good ol’ days in their content house, Froste also suggested that the group’s potential was untapped.

imagine we had enough money to where we didn't have to stress over where our next meal was coming from. Coulda done some big things but i guess we'll never know

The former 100 Thieves content creator appears to blame his former organization for failing to provide reasonable pay. Then he starts playing the “what if” game and goes on to level more serious accusations.

imagine we did, but were so broke that we literally could not afford to do anything that was worth fliming.

LMFAO you have no idea how much we asked, it got to a point where it was almost pathetic. But go ahead man, blame the 20 year old kids that had no idea what they were doing instead of the of 100+ million dollar predatory organization lol

Despite only making a meager $1,650 a month, Froste claims “The Mob” was forced into a house where rent cost $2,500 a month. The list of accusations goes on.

He claims 100T took 95% on sponsorship deals and even blames them for poor internet in “The Mob” content house. From Froste’s POV, the group had been taken advantage of since they were young and unknowledgeable about the scene.

Obviously, 100T founder & CEO Nadeshot had a different perspective. He went live on Twitch to respond to the accusations and he brought receipts.

CEO of 100 Thieves, @Nadeshot went live to respond to @Froste's comments about how he and the Mob were allegedly handled pic.twitter.com/xfkvtoTb46

From exposing Froste’s lack of work ethic to disputing a majority of his claims, Nadeshot’s response was scathing and unforgiving.

Nadeshot directly responds to several of Froste’s accusations too. He states the real sponsorship revenue split was 85%, but “The Mob” actually retained 65% on two separate deals.

Nadeshot argues against Froste’s claim of 100 Thieves keeping 95% of revenues from brand deals claiming they actually took 85% and in 2 of them the Mob retained 65% of the revenue pic.twitter.com/ZfLC40G0in

It seems Froste may only have himself to blame for failing to take advantage of the opportunity. Nadeshot further reveals that Froste only streamed 40 hours a month, an amount that most streamers would easily hit in a week.

He also refutes the claims of unaffordable housing. It appears the decision for the $10,000 house came from “The Mob” and not 100 Thieves.

Not to mention, the group apparently received an additional $2,500 a month for content. So Nadeshot was dumbfounded by the accusations of unfair pay.

Froste Doubles Down And Blasts Nadeshot For Lying

The story doesn’t end there though. Froste continued calling out Nadeshot for lying before eventually starting his own stream.

It's actually insane how much he's lying rn. Any bit of respect i had for Nadeshot has gone out the window

While Froste admits that he could have “grinded harder”, he remained steadfast in blaming the environment provided by 100 Thieves.

Froste explains why the house the Mob was in cost them $10,000 per month pic.twitter.com/NIZcClESzc

Froste insists that the group had no other choice for housing given the requirement of being located near the 100T content house. Then he tries clarifying his minimal streaming hours by saying he put in significant time on other members’ streams.

With Froste providing minimal evidence and taking minimal (if any) accountability for the failed partnership, the internet quickly pointed out his sense of entitlement.

Bro got a job, didn’t work and expected 6 figures, crazy

Most people viewed a $60K salary to stream for one of the most popular gaming organizations in the world as the opportunity of a lifetime.

I personally don’t know how someone could be in their position and not make over $100k a year. 100k’s of followers, infinite time, friends with the ceo of one of the largest orgs, and living in LA where they are 30 minutes from every influencer ever.

They even pulled previous tweets from Froste that seemingly contradicted his accusations. If he truly was as broke as he claims, surely ordering an absurd amount of food delivery might be part of the reason.

It appears Nadeshot and Froste will have to agree to disagree for now. Interestingly, Froste remains the only member of “The Mob” to speak out. While both Classify and Avalanche tweeted reactions, they remained neutral in the drama.

100 Thieves may have made some questionable decisions and probably could’ve better supported “The Mob”. However, Froste’s refusal to take accountability hasn’t garnered much empathy from others. It’s just excuse after excuse that pins the blame solely on the org.

Nadeshot and 100 Thieves will hope to move on from this drama. It is yet to be seen whether Froste will do the same.