Record-Setting 17-Foot Burmese Python Caught In Florida, So We Can Revoke Their State Status, Right? 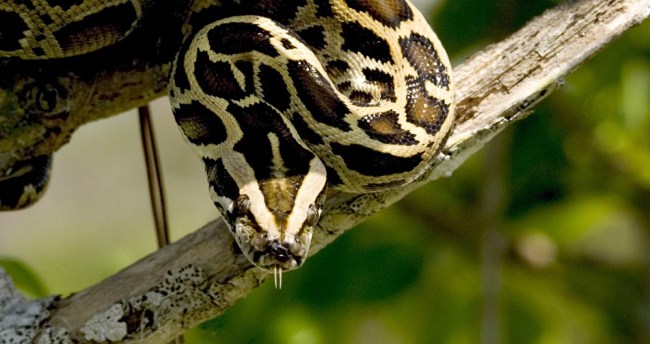 If anyone’s been looking for an excuse to go back to 49 states and just ditch Florida and all their insanity, I think we now have a rock-solid case for doing so.

Because, as far as I am concerned, I now have reason to never, EVER set foot in Florida again thanks to this record-setting 17-foot Burmese python some dude captured in Miami-Dade County in South Florida.

The python was captured as part of SFWMD’s Python Elimination Program, which describes itself as an effort to preserve the ecosystem of the Florida Everglades by taking aggressive action against pythons. “Eliminating invasive species such as Burmese pythons is critical to preserving the rare Everglades ecosystem,” SFWMD said Wednesday in a news release.

Wait a second. Hold up.

They actually have something called the “Python Elimination Program” down there? What the…?

According to CBS Miami…

It’s the third caught as part of the program that measured more than 17 feet.

With the record catch, SFWMD’s python hunters have now eliminated 1,859 of the invasive snakes on District lands, stretching a combined length of more than two miles and collectively weighing more than 11 tons

And in case that isn’t enough of a reason for you to get with me on this whole revoking Florida’s state status thing, take a look at this 7-foot, 150 pound monitor lizard that was spotted several times bumping around a neighborhood in Davie, Florida over the last couple of months.