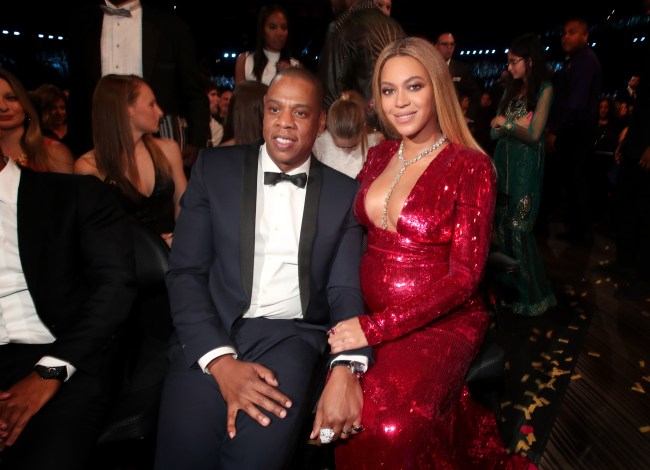 Jay-Z and his wife Beyonce move past being considered ‘rich’ and into the realm of ‘wealthy’ a long time ago. Together, they’ve got an estimated net worth of somewhere around $1 billion. They’re living in one of the largest and sickest homes in Hollywood.

That doesn’t happen overnight. Jay-Z, real name Shawn Corey Carter, has worked his ass off since his days of selling drugs to become a true hip-hop mogul. He tours relentlessly and counts the most famous people on the planet amongst his fans.

And you already know this but Jay-Z’s purview extends well beyond performing as a hip-hop artist. The man’s got the 40/40 Club, Rocawear, Roc Nation, and Roc Nation Sports. Without his wife, Jay-Z has an estimated net worth of nearly $900 million.

It should come as no surprise that Jay-Z was the higest-paid act in rap last year but it is somewhat surprising that he brought home almost 3x as much as Kanye West who released an album not too long ago and appears to be printing cash with Adidas.

Other rappers on the list include Drake at #4 who was the most streamed artist of the past year with over 5 BILLION streams in the past 12 months. Kendrick Lamar has been earning money faster than he can spend it thanks to sponsorships with American Express and Nike, as well as his sold-out TDE: The Championship Tour.

Forbes released their list of the 2018 highest-paid rappers in the world with Jay-Z at #1 and Kanye at #10. Here’s what the rest of that list looks like:

CHECK IT: Here’s How Jay-Z And Diddy Made A Literal Fortune Off Cheap Grapes And The Booze Industry

Every year I see this list form Forbes and every year I wonder when Diddy will fall out of the top 10 but the dude’s got his hand in so many products, endorsements, and his own booze. I can’t foresee a time when he doesn’t rank among the 10 highest-paid rappers in the world even when he hasn’t rapped in forever.

Dr. Dre is on this list partly due to earning a comical amount of cash in the Beats By Dre deal with Apple that continues to be one of the greatest deals ever signed by a rapper. DJ Khaled rounds out the list at #11 thanks to deals with Ciroc, Beats/Apple, and Weight Watchers.

All these dudes out here making tens of millions of dollars. It’s got to be difficult to remain an angry rapper when you’re making so much goddamn money that you can literally buy happiness.

You can click here to read the forbes article in full.