If You Thought 2020 Was Bad, Oh Man, Just Wait Until Next Year 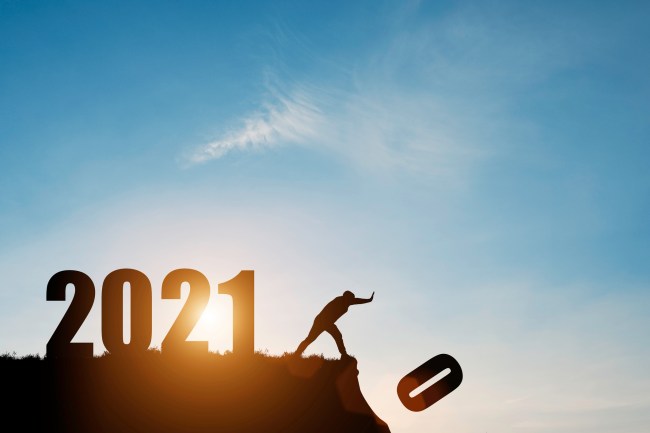 Stop what you’re doing this instant. Trust me, you have time. Now, step outside and take a deeeeeeeep breath. Smell that? That’s the stench of doom, and it’s coming for me, you, and everyone else on the planet like a deranged sewer rat high on dumpster juice. The word on the street is that 2021 will come with savageries that will put this dreadful year to shame.

Over the past 10 months, we have been forced to get drunk at home, exist without live music, endure borderline economic collapse and live in constant fear that some pesky virus is going to infiltrate our bodies and turn our lungs into mush. But the United Nations says we haven’t seen anything yet.

The world is presently on track to a “humanitarian catastrophe.”

UN officials said last week during a special meeting that the reverberations of the global pandemic are going to force nations to prioritize their people. It could create a situation where the rich are getting help while those on the sagging teat of the downtrodden will be left without basic necessities. So, if you are one of those people thinking about making a witty post to your social media today that reads something like “2020 has been the longest decade of my life, bring on 2021,” you might want to hold up a while longer. Like author Cormac McCarthy wrote in his novel Suttree, “there are no absolutes in human misery, and things can always get worse.”

Heck yeah, they can.

Populations have done their best to remain hopeful that 2021 will be a better year than the last, but it doesn’t take much to see that’s probably not going to be the case. In fact, 2021 could quickly become just another crapocalyptic circus in slow motion. Despite all of the hype over the vaccine rolling out this week, coronavirus cases are worse now than they’ve ever been in the United States. To take the wind out of our sail even further, bands are already canceling tours for next year. Nick Cave and the Bad Seeds posted yesterday that their entire European tour for 2021 is no longer happening. And even though more American musicians are starting to schedule their long-awaited return to the stage, these plans could easily go down in flames as soon as the Biden Administration takes over in January. Biden has said time and again that he would shut down the entire country to get the virus under control. So, you know, more closings, shutdowns, and every maniacal aspect of 2020 will likely be experienced again in the new year.

Where the worldwide misery could really go buck wild, however, is inside the crevasses of COVID relief efforts. Although countries are doing what they can to slow the spread of the virus, the UN says that those actions have created a gnarly uprising in people desperate for humanitarian assistance. For this reason, officials claim a whopping $35 billion in aid funding is required, or else they fear several countries will be ravaged by famine next year. “2021 is literally going to be catastrophic based on what we’re seeing at this stage of the game,” said David Beasley, head of the UN’s World Food Programme, calling the present condition of the world “the worst humanitarian crisis year since the beginning of the United Nations” 75 years ago.

One of the primary concerns is that vaccines will be distributed to the highest bidder, leaving poor countries without the necessary resources to survive. Pfizer’s vaccine is reportedly effective in strengthening the protection against the coronavirus after the first dose, and it is being administered for the first time this week in the UK. In the United States, there is, of course, talk about who will be the first to get the injection when it comes time. Healthcare workers will probably be at the front of the line, followed by those with health issues and people over 65.

Still, considering that some of the latest coronavirus symptoms include erectile dysfunction, we are over here hoping like hell that we at least get a fair shot at it next spring. But will the peons of the planet even stand a chance? Or will the wealthy be a priority? World leaders are worried that the vaccine will find its way to the rich before the poor. To combat this possibility, the UN is demanding “equitable distribution.” But the fact that they are worried about that not happening should tell you everything you need to know. After all, the drug companies are involved.

“We simply cannot accept a world in which the poor and marginalized are trampled by the rich and powerful in the stampede for vaccines,” said António Guterres, Secretary-General of the United Nations. “This is a global crisis, and the solutions must be shared equitably as global public goods.”

According to the US Food and Drug Administration, the vaccine was just granted authorization for emergency use last week. But the agency is still trying to figure out whether the vaccine is safe and effective for Americans. The federal government, which has spent billions of dollars on COVID vaccines, is expected to cover the costs of them initially, but nobody knows how long this hospitality will last. The CDC claims that no American who wants the vaccine will have to pay.

Some Americans, however, don’t trust it. Nearly half of the population is skeptical of the vaccine, according to a recent poll. Fifty-five percent of the population says it would get the vaccine today if it were readily available, while the rest are still on the fence about it to some degree. Many people want to sit back and watch what happens to everyone else before putting it in their bodies. They want to see public figures like Dr. Fauci, Donald Trump, and the Pope get stuck before they even dare go down that path. But, depending on their work situation, a skittish society could be forced to take the vaccine regardless of their immediate opposition. Companies will have the right to force employees to get vaccinated as a stipulation of employment.

Just don’t expect the world to change as soon as we ring in the New Year in the next few weeks. We’re going to have to wade through this mess awhile longer before things finally get straight. Let’s just hope that conditions don’t get drastically worse and put the world in a tailspin to doomsdays front door. Because as everyone talks about vaccines, there is also a rumor about world leaders being in cahoots with alien civilizations. A galactic federation is reportedly waiting for citizens to calm down before making itself known. That said, 2021 has a fair shot at becoming much weirder than 2020 ever thought of being. And if that scares the crap out of you, good.