This 2,350-Pound Pumpkin Won The ‘Super Bowl Of Pumpkins’ Which Is More Than I’ve Done With My Life This Year 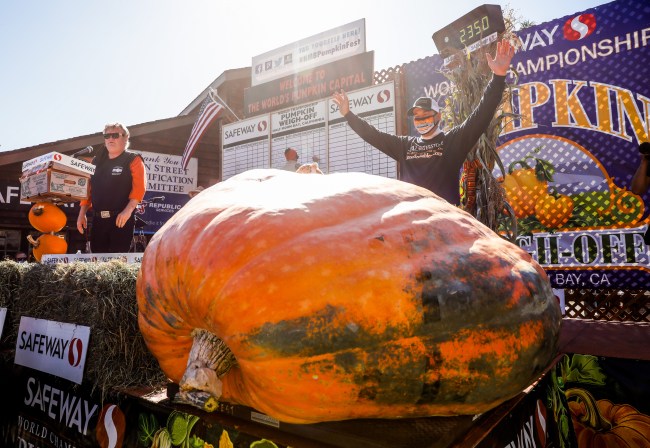 A 2,350-pound pumpkin named ‘The Tiger King’ just won the 47th annual Safeway World Championship Pumpkin Weigh-Off in Half Moon, California which is considered the ‘Super Bowl of Pumpkins’. The grand prize is paid out on a price-per-pound so the bigger the pumpkin the fatter the check.

Maybe my prize for winning the Super Bowl of Nothing/the Super Bowl of Mediocrity is all of the colleagues I’ve met along the way that didn’t pan out into meaningful friendships? Sorry, that’s dark, I love my colleagues. But not as much as I love this big ol’ pumpkin.

Travis Gienger was paid $7-per-pound for his top prize pumpkin. At 2,350-pounds that came out to $16,450 in prize money which I have to assume is more than he spent on growing the pumpkin itself. I honestly haven’t the slightest idea whatsoever who you’d grow the King of Pumpkins. What do you even feed a pumpkin to make it bigger? If you Google ‘Pumpkin Food’ all you get are a bunch of Thanksgiving recipes and nothing about what you inject into a pumpkin to grow it into a Soviet-style roided-up Pumpking.

This aerial view of all the enormous pumpkins stuffed into the beds of pickup trucks has me thinking about how surreal it must be for someone to be randomly in the area and suddenly you see a hoard of pickup trucks driving by with 1,000+ pound pumpkins all headed the same direction. If you ever happen to see that, you know you’re in the right place.

This was the grand prize winner’s first year competing in the prestigious Half Moon Bay competition but he’d previously grown a 400+ pound pumpkin so this wasn’t his first time in the big leagues:

Gienger says he took extreme measures to keep the giant pumpkin intact while transporting it on a 35-hour drive from Minnesota to Half Moon Bay, including building a special palette for his trailer, wrapping the pumpkin in blankets and pool noodles to keep it from getting scratched, and throwing dirt in the back to keep the vines watered so it wouldn’t lose as much weight.
“People were wondering what we were hauling when we stopped at the gas station and we had to throw buckets of water on it. It was kind of funny,” he said.
It was his first year entering the competition at Half Moon — although he is not new to growing giant pumpkins. About 25 years ago, he grew a 447-pounder. He decided to enter the competition at Half Moon this year because it’s known as the “Super Bowl of Pumpkins,” he told CNN.
The competition offered a special $30,000 mega prize this year to any grower who broke the world record of 2,624 pounds that was set in a weigh-off in Germany in 2016. No one at the Half Moon Bay competition broke the world record this year, according to contest officials. (via CNN)

If anyone read this is skilled in the arts of growing massive pumpkins and wants to drop some knowledge on me you can hit me up at @casspa on Twitter or via email.