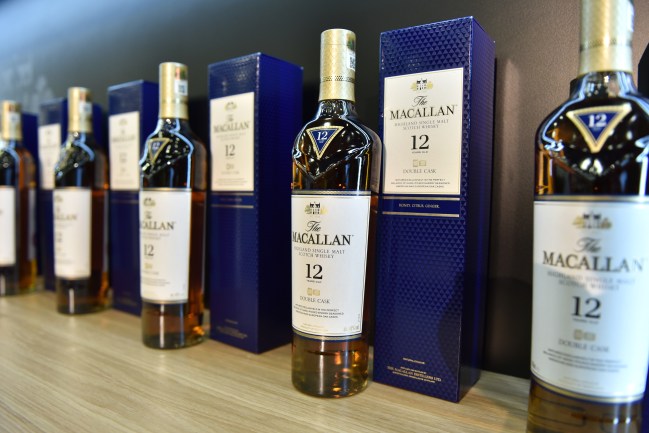 On the one hand, selling a collection of birthday presents given to you every year over the course of 18 years is not a super chill move. I’ve got tchotchkes hidden away in cabinets that were gifts from my parents that never even made it out of the box (and never will) that I’ll never part with because it’s somehow been stamped into my brain that a gift is a gift and you don’t re-gift/part with that gift unless it’s wine/champagne/alcohol and then it’s acceptable to drink it with the person who gifted it to you in the first place. These are the rules.

This dude who just sold an outrageous and enviable Macallan Single Malt Whisky collection marches to the beat of a different drum. His father has been gifting him a bottle of Macallan every single birthday for the past 28 years and he’s just sold that collection for enough money to put the down payment on his first home.

Over the span of 28 years, Matthew Robson’s father spent roughly $6,000 in total on the 28 bottles of 18-year-old Macallan. He did mention there were other gifts throughout the years, so he wasn’t only getting booze from his dad. This tradition also started before he was of drinking age which is interesting. That $6,000 investment in Macallan was just turned into a $53,000 payday for the son who will now purchase his first home.

According to the story over on the BBC, this intact collection was described as the ‘perfect set’ and the price of Macallan has spiked in recent years with global interest consistently on the rise:

The 28-year-old said it “probably wasn’t” the best gift for a young boy but with “strict instructions never to open them” they had become a nest egg.
“Each year I received it as a birthday present,” Matthew said. “I thought it was quite a quirky little present as I was slightly too young to start drinking.
“But I was under strict instructions, never, never to open them and I tried my hardest and succeeded and they’re all intact.”
His father Pete, who is from Milnathort in Scotland, said the first bottle of 1974 whisky was bought to “wet the baby’s head”.
“I thought it would be interesting if I bought one every year and he’d end up with 18 bottles of 18-year-old whisky for his 18th birthday,” he said.
“It wasn’t the only present he got from us. It was just meant to be a unique present but it was a little bit of luck that we kept it going.”
Since then, experts say Macallan has become collectable and Matthew is hoping to sell his collection for £40,000 ($53,000) and use the money for a house deposit.
It is being sold by whisky broker Mark Littler, who has described it as a “perfect set”. (via)

This is a genius birthday gift. Cask whisky appreciates much better, but properly stored bottles can also appreciate nicely. https://t.co/0bYgQ5a2BM

Must be nice for whoever out there will drop $53,000 (or more) on this collection. I wouldn’t be the least bit shocked to see the final sale go for A LOT more than $53,000 given how many bottles are perfectly intact.

The flip side of this is he’s spent all those years thinking about this whiskey and he’ll never get to take a single sip. This was the responsible thing to do, surely. Turn that gift into an investment and purchase his first home. But he’s spent a whole lifetime thinking about those bottles and what’s inside and now he’ll never know. That would plague me.

For more on this story, you can head on over to the BBC.