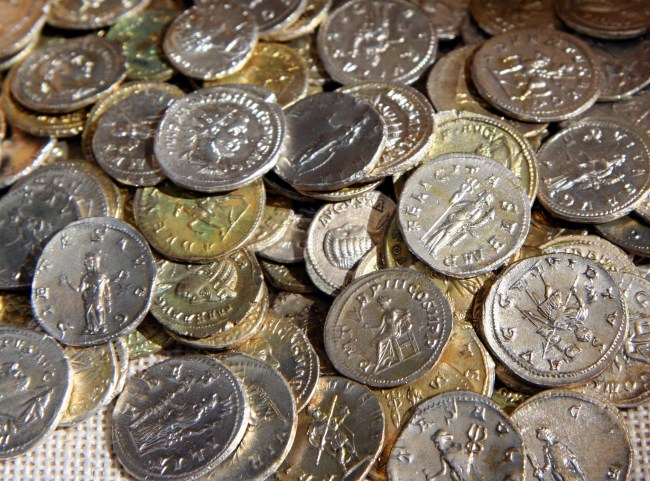 People in the UK have found over 47,000 historical artifacts during lockdown this year, a haul that includes thousands of gold coins and Roman antiquities.

Here in Florida, I see those dudes walking the beach in their banana hammocks with their metal dectors in search of finding someone’s lost jewelry. In Europe, they find priceless treasures and they’re then (often) fairly compensated for their treasure by the British Museum.

The UK’s Treasure Act of 1996 states that anything found over 300 years old but be turned into the local coroner who then turns them over to the British Museum. The pieces are then given a value and the treasure finder is cut a big fat check depending on what it was worth.

This year has seen a massive uptick in treasure hunting because a lot of people have nothing better to do than wander around in the woods. Here’s a rundown of what some people have found this year around the UK:

The artifacts the at-home archeologists are uncovering have actual historic value, too. Of particular note are two hoards of gold coins. The first (pictured at top), which was uncovered in the New Forest area, includes 63 gold coins and one silver coin dating back to the 16th century that feature monarchs Edward IV and Henry VIII. A second, consisting of 50 modern South African gold coins, was found buried in a garden 50 miles north of London. Other artifacts of interest include a copper alloy Roman furniture fitting with the face of the god Oceanus and a lead-alloy medieval seal matrix in the name of David, Bishop of St Andrews, that is believed to have been a forgery. (via Robb Report)

This Roman furniture fitting of the ancient Greek god Ocean was found and dates back between AD 43-200:

The report from CNN states that there have been over 47,000 total objects turned over to the British Museum this year which is really an insane number. It’s not as if they’re finding an old glass bottle and turning it in for cash. These are all rare artifacts that were usually worth some cash:

This year, backyard archaeologists in the United Kingdom have recorded discoveries of more than 47,000 objects, the British Museum announced this week.
Regular people found the vast majority of the historical artifacts by traversing the countryside with metal detectors, before adding or updating records through the museum’s Portable Antiquities Scheme.
The British Museum said the program also saw an uptick in people updating digital records of antiquities while the country was under a full lockdown between March 22 and May 13.
That database contains records of more than 1.5 million objects discovered since 1998 by the general public rather than by professional archaeologists.
“It is brilliant to see the scheme growing from strength to strength during lockdown thanks to garden discoveries and digital reporting,” said UK Culture Minister Caroline Dinenage, in a news release. (via CNN)

I’m having trouble imagining anywhere in the USA that a program like this would work. The obvious answer is parts of the Northeast but it’s not like people can just go start digging up Central Park or Newport, Rhode Island and look for colonial treasures. All of the European treasure that could be found in the USA is mostly in the form of sunken ships found off the coasts so it’s not like it’s easily accessible from anyone without a ton of money and specialized equipment.

For more on this, you can head on over to the Robb Report.