4 Of Life’s Mysteries That Are Probably Ellen DeGeneres’ Fault 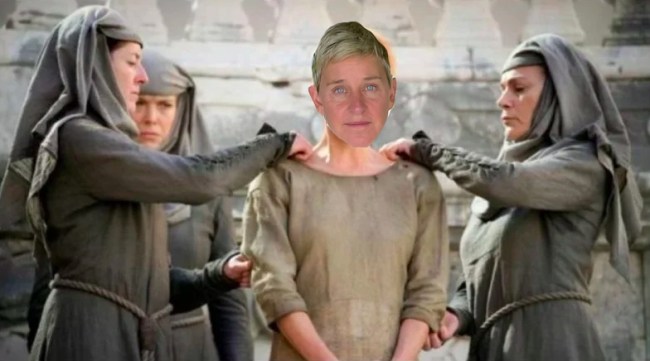 Do you hear that dull rumble?

That is the sound of all the prisons across America collectively quivering at the possibility of Felon Degeneres wreaking havoc at their respective penitentiaries.

Over the past two months, brave men and women have come forth to expose the bad and dangerous dancing talk show host for a revolving door of workplace infractions that include, but are not limited to, the following:

Ellen Show staffers have most recently come out to make some allegations that would close the book on some of American’s most infamous and longstanding mysteries. Here are a few.

After executive producers mandated Ellen to take sensitivity training after she heated up leftover fish in the communal kitchen, she relocated to Utah and took a gig at a pizza place to “connect with the poors.” Struggling to keep up with the rigors of manual labor, Degeneres hurriedly grabbed a handful of mozzarella cheese from the aluminum tub labeled, “Diarrhea Cheese,”  and personally delivered the pungent pie to Michael who ate the entire thing as all his friends watched.

Ellen had reportedly lent Mr. Simpson her gloves in the 1995 lead-up to his appearance on her show, as O.J. did not own a pair for their scheduled joint dance to Michael Jackson’s Thriller. Ultimately, O.J. was not able to attend, so Ellen compensated for his absence by gifting everyone in attendance a white Ford Bronco.

Many people have speculated about what turned a global phenomenon into a punchline, but sources close to people who have a neighbor who worked as an intern for the Ellen Show have confidently stated that during the writing process of the eighth and final season of Game of Thrones, every time George R.R. Martin expressed a good idea that people would enjoy, Ellen was there to viciously snap his suspenders, and sometimes even call him an “old bag who ain’t worth shit.”

The pair ultimately settled on a king no one asked for and Arya taking a nap during the Final War.

While there have been false narratives swindling around about “technical errors” erasing surveillance footage of the disgraced financier’s cell at the time of his death, an officer within the prison eventually admitted that his wife taped over the footage in favor of the February 2016 Ellen Show episode featuring the Damn, Daniel duo.

I want to be clear: I cannot confirm or deny any of the aforementioned allegations, but I can also recognize disturbing trends. And I don’t want the kind of woman willing to serve diarrhea cheese dancing around my children.