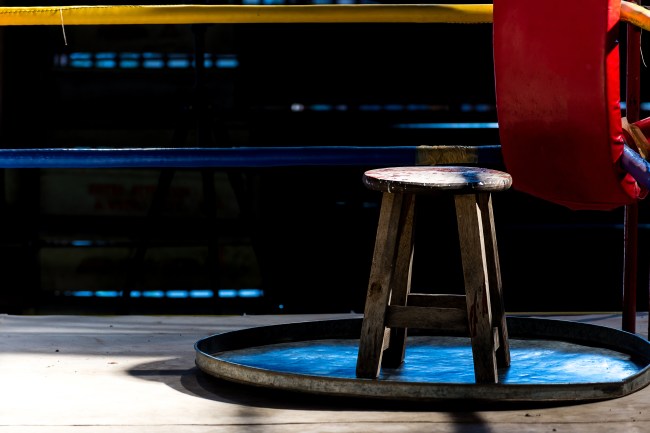 Chris Martin aka Bagel Boss Guy is in desperate need of a victory after losing his first professional fight to a chubby hipster in a Long Island bagel shop. As 25 million people already know, the vertically challenged man lost by TKO in the time it took to say “Short Lives Matter.”

But, the comeback is always stronger than the setback, and Chris Martin is primed to exact his revenge in a recently announced boxing match that will reportedly take place against another viral star in Atlantic City this fall.

Sources with inside knowledge of the fight say that Antoine Dodson from 2011 “Hide Yo Kids, Hide Yo Wife” viral fame is the possible frontrunner for BBG’s opponent, but as a thought exercise, I’d like to present five other viral star opponents that could make this fight one for the record books.

The ironically named Hung has a lot to prove seeing the American Idol sensation hasn’t been relevant in over a decade. He’s hungry, and he’s got a mouth-full of mangled teeth that are waiting to eat Bagel Boss Guy’s lunch. Don’t let Hung’s paltry 5’7”, 68 pound fool you–you’d be surprised at how much rage can build up simply by waking up every day knowing that you got beat out by Clay Aiken.

Ok not . viral star but the perfect opponent to juxtapose good vs. evil. No two people have ever been more intrinsically different than Frankie Muniz and Bagel Boss Guy. Muniz popped out of the womb with a Kids’ Choice Awards trophy, whereas Bagel Boss Guy has spent his entire life going entirely unnoticed and unappreciated. Muniz may have the height advantage and is a bit more nimble, but I’d be hesitant to underestimate the power of 45 years of rejection.

DANIELLE BREGOLI AKA ‘CASH ME OUTSIDE’ GIRL

This matchup has everything. The two both rose to fame through controversy, are compelling anti-heroes, and neither of them are permitted to ride roller coasters. Bregoli has never had a father figure, so she harbors resentful sentiments toward middle-aged men, which Bagel Boss Guy has seemingly been rejected by every woman from Maine to Montana, so you won’t be seeing him arguing for equal pay for the fight. Whatever the outcome of the fight, at least Bagel Boss Guy can sleep well at night knowing that he finally got physical with a woman.

Daddy Long Neck has the kind of frame that a strong fart could dismantle, but with a neck longer than Bagel Boss’s leg, the bird’s eye view could give Daddy Long Neck a fatal advantage. Fight aside, Mr. Long Neck could serve as an inspiration to Bagel Boss that you don’t have to have to be an Abercrombie model to pull tail. Or two.

Charlie’s video has been viewed more than 870 million times and has reportedly earned the family more than a million dollars. Charlie’s made more in his diapers than Bagel Boss Guy has sniffed in four decades, but it remains to be seen whether the fame at such a young age has made Chuck complacent. Now 13 years old, Charlie has the height edge on Bagel Boss, but if he’s still crying like a little wimp over a little finger suck, Bagel Boss Guy is destined to rock that baby back bitch to sleep.

I like forward to spending whatever amount of money is asked of me to make one of these fights happen in September.