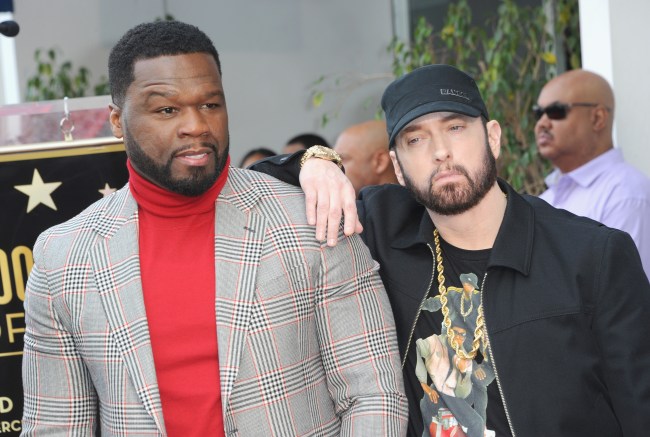 50 Cent’s wrath spares no one, not even his first-born son.

As an artist, it is advisable to get on 50’s good side so he doesn’t, oh I don’t know, buy 200 front row seats at your concert and leave them completely empty just to troll you.

Miraculously, Eminem and 50 have engaged in a two-decade long friendship that has resulted in no notable public beefs or diss tracks or homicides, digital or otherwise.

In an interview for his website Thisis50.com, 50 revealed that while Em isn’t much of a texter, he’ll randomly send his buddy messages about his hog that warms 50’s heart.

He said: “To this day, you know what’s ill about Em, he hits me randomly.

The text references the lyrics 50 rapped on the Pop Smoke single ‘The Woo’, which also featured Roddy Ricch – in the track, for context, 50 is quoting a woman.

The rapper then continued to relay what Eminem had texted, adding: “‘You said a line that a bitch was supposed to say and made it sound cool. Oh, you was on some other s***.’

“But he’ll stop doing what he’s doing to do that. That s*** makes my day on a whole other level. Cause I’m like, that was random.

“I’m always gonna have love for him. That’s my guy.” [Transcribed by LADbible]