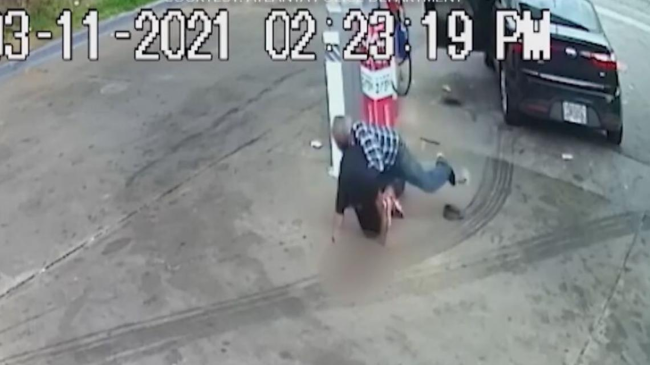 Have we learned nothing as a society? Is there really someone out there who does not know that 82-year-old men are simply not to be messed with?

Apparently there is, because one ignorant teenager in Atlanta found that out the hard way when he tried to carjack a vehicle only to get thwarted by an 82-year-old man who tackled and wrestled his dumb ass to the ground, forcing him to eventually flee the scene.

Of course, the entire scene was captured on the gas station surveillance video.

According to 11 Alive, the elder statesmen was just minding his own business on March 11 at a local Chevron gas station, pumping some petrol into his very practical Kia, when this ignorant teen pulled out a gun and told the man “let me have that car.”

That was when ish got real for the teen as the old man, rather than acquiesing, went after him and knocked him to the ground.

After wrestling for a bit, the two separated and the suspect, according to a report by the Atlanta Police Department, pointed the gun back at him and asked, “You wanna die?”

At that point the old man told the suspect “no and ran towards the store.”

The teen, who did manage to grab the keys, attempted to start the car, failed (what? how?), and then took off on foot. He is currently still at large.

The victim, who told police he injured his arm during the fight, was able to retrieve the keys to his car after the tussle as they were found on the sidewalk next to the gas station, according to police.

Atlanta police are asking anyone with information about the carjacking attempt to call Crime Stoppers Atlanta at 404-577-8477 or visit their website at www.StopCrimeATL.com.