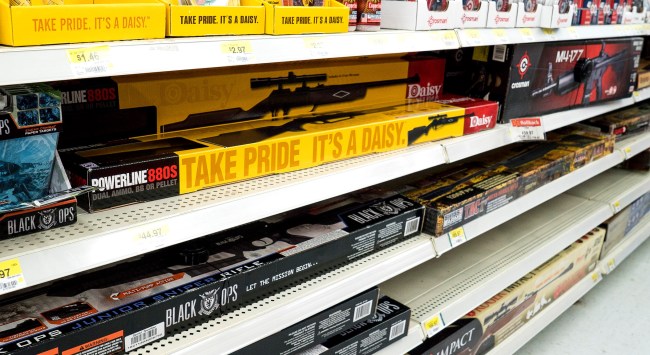 A 9-year-old Louisiana student was suspended because a BB gun was spotted in his bedroom by his 4th grade teacher during an e-learning online class.

Seriously. This actually happened. I am truly at a loss here. What, the heck, is wrong with people these days? Yes, I know there are a lot of Karens and Terrys out there. That’s become glaringly obvious.

But… really? Suspending a 9-year-old for having a BB gun in his bedroom while taking a virtual class? That’s where we’re at now?

Ka Mauri Harrison, a fourth grader at Woodmere Elementary School in Jefferson Parish, was taking a test in his bedroom on September 11 after being sick and not participating in online school the day before, family attorney Chelsea Cusimano told CNN on Friday.

She said Ka Mauri had muted the volume on his computer so he could concentrate and had muted himself since it’s required when students are not speaking.

One of his siblings, who shares his room, stepped, or tripped on a BB gun that Ka Mauri had received as a gift. Ka Mauri picked up the gun and was out of sight from the screen for a moment. He then placed the BB gun next to him in his chair, Cusimano said.

School documents show the school recommended Ka Mauri’s expulsion for “possession of a starter gun, stun gun and/or facsimile” according to Jefferson Parish Public School Policy and Procedures. At a hearing held September 22, it was determined Ka Mauri was guilty of displaying a facsimile weapon while receiving virtual education. Cusimano, who told CNN she participated in the hearing, said a hearing officer determined it was a BB gun.

The school amended the recommendation for expulsion to school suspension for six days and social work assessment. Ka Mauri returned to online school on Thursday, September 24. He had been out of school since the day of the incident, according to Cusimano.

Amazingly, all of that might not even the dumbest part of the story.

Now, thanks to the publicity surrounding this nonsense, the freaking Attorney General of Louisiana, Jeff Landry, has gotten involved and announced that he is going to spend his office’s time and money to investigate it.

“I am alarmed by what appears to not only be multiple violations of both the State and Federal Constitutions, but also blatant government overreach by the school system,” Landry said in a statement.

“For anyone to conclude that a student’s home is now school property because of connectivity through video conferencing is absurd … It is ludicrous for this All-American kid to be punished for taking responsible actions just as it is for his parents to be accused of neglect.”

Another statement from the Attorney General’s office provided to KALB-NBC reads, “In a letter to the Louisiana Department of Education and the Louisiana Board of Elementary and Secondary Education, AG Landry notes that the law clearly grants parents and their child a right to appeal to the School Board and to seek judicial review of a decision by the Superintendent when the child has been recommended for expulsion. By systemically violating students’ constitutional rights, AG Landry declares, school systems’ eligibility for state and federal funds are jeopardized.

“‘Legal action can often be a lengthy process, but I am committed to seeing this through no matter how long it takes,’ said AG Landry. ‘Today’s letter is just the next of many steps my office and I are taking to seek justice for Ka’Mauri and his family.'”