Anti-Masker ‘Terry’ Melts Down At Walmart, Tells Employees They Are Serving Satan 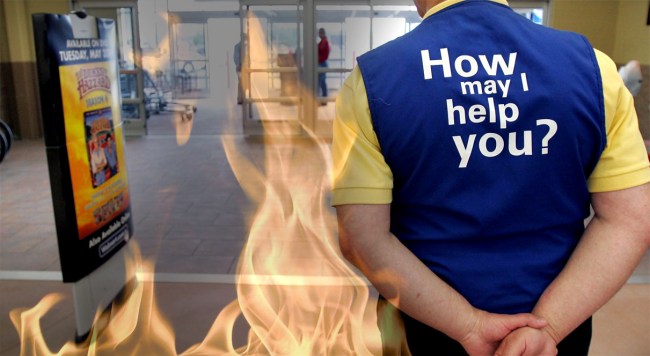 I’m not sure there is enough money in the world to get me to work at a Walmart. Especially in a position where I would have to deal with the general public, aka the People of Walmart, on a daily basis.

As if working there wasn’t bad enough before the pandemic hit, now with all the anti-masker Terrys and Karens running around doing things like pulling guns when told to *gasp* respect the health and well-being of others inside the store, you’d have to back the Brinks truck right up to my house before I would even begin considering working there.

Case in point, this guy at a Walmart in Alaska.

This dude, who apparently is a Texas Longhorns fan (but must not follow the team very closely), absolutely lost his mind last week when he was asked to remove his non-mask wearing ass from the store.

“Get back on your highway to hell and get out of a godly man’s face!” he completely unironically told the Walmart employees on his way out the door.

Dude was such a godly man he then dropped this gem, “By your very blind ignorance, you don’t have the ability to even come up with your own f***ing ideas.”

After further rambling about his “rights” (why does that sound familiar?), this godly guy then flipped the bird to the employees and added, “Please, return to your service of Satan and your ignorant belief that you’re right!”

A spokesperson for Walmart told Heavy.com, “It’s unfortunate that this individual chose to express their displeasure in such an inappropriate manner, but we’re proud our associates displayed patience and professionalism as they navigated this challenging situation.”

Heck, I’m proud of them.

Of course, this was only one of many anti-mask tirades captured on video over the last week.

A similar situation occured at a Chipotle when another Terry wearing a “freedom” shirt (again, completely unironically) refused to wear a mask, asked to speak with the manager, and threatened the restaurant with a lawsuit.

Anti-masker at Chipotle wants to speak to the manager & threatens to file a lawsuit.

This is a joke right? That shirt is perfect. 🤣 pic.twitter.com/BP88WWVXjZ