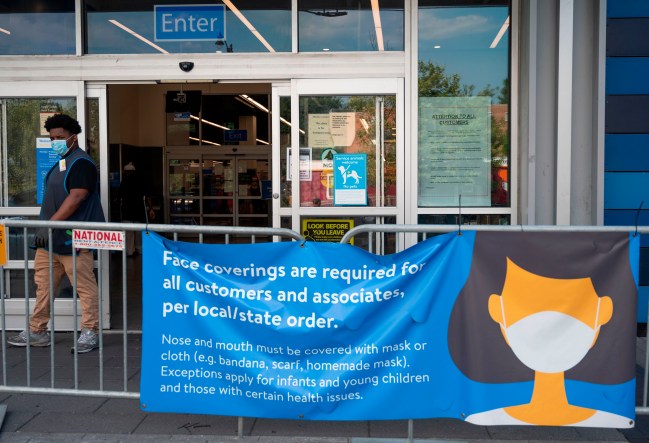 Despite the fact that several large retailers like Walmart have recently said that they will require customers to wear masks in their stores last week it appears that many have reversed course and now will not enforce mask mandates following several violent confrontations.

Walmart, Home Depot, Lowe’s and other retailers say they won’t require people to wear masks in their stores to avoid confrontations between customers and employees.

Walmart (WMT), Home Depot (HD), Lowe’s (LOW), Walgreens (WBA), CVS (CVS) and others say they still won’t prohibit customers who refuse to wear a mask from shopping in stores. The issue, they say, is they want to avoid confrontations between angry customers and employees.

Retailers and their employees are finding themselves playing the uncomfortable role of mask police. The increase in coronavirus cases is prompting concern over how to protect both customers and workers in crowded stores from infecting each other.

Apparently Walmart and others will now only “recommend” that customers wear masks but will allow people who can’t wear masks due to health conditions or religious beliefs to shop in their stores. The retailers are citing the fact that having employees forcibly denying entry to angry customers who don’t want to wear a mask is just “too dangerous.”

About those mask "requirements" big retailers like Walmart, Home Depot and CVS announced last week. They won't keep customers who refuse to wear masks from shopping in stores.

"It's too dangerous to forcibly or physically deny entry," Home Depot said.https://t.co/Br5wGFw0go

“With every requirement there are exceptions that have been established to avoid escalating the situation and putting our associates in harm’s way,” a Walmart representative said. “Our goal is to keep associates from a physical confrontation in the stores.”

Walmart is also adding signs about the policies, which exempt small children and people who can’t wear masks due to health conditions or religious beliefs, and announcing them over store loudspeaker.

The home improvement chain Lowe’s says it’s also added signs at its stores, requesting that customers wear masks for the safety of everyone. It is also providing free masks to customers who need them.

“We will not ask our associates to put their safety at risk by confronting customers about wearing masks,” a Lowe’s representative said.
Indeed, a Home Depot spokesperson compared the company’s mask requirement to its shoplifting policy, where employees are told not to block the entrance or chase after a customer. “It’s too dangerous to forcibly or physically deny entry.”

Meanwhile, CVS said it will “ask for [customers’] cooperation” with the mask policy. “In the event of non-compliance [the store] will expedite their transaction and provide them with other options for their future needs,” such as delivery and drive-thru,” a representative for the company said.

Here’s a video of what Walmart employees are being trained